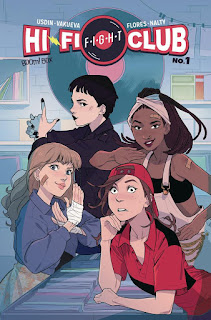 Boom Studios have a real knack for publishing fun and inventive miniseries, usually taking something very familiar and then giving it a distinctive twist or creative take. They're at it again with Hi-Fi Fight Club, which essentially blends mediocre 1990s cult film Empire Records with another element revealed in the first issue's final page (it's not a fight club).

The characters are all very familiar, but are presented in a generally upbeat and enjoyable way. The artwork is very appealing, enhancing the very warm and optimistic tone of the book. The big challenge facing Hi-Fi Fight Club going forward is how to keep that very likeable tone but find fresh and original material to sustain it in the longer term.

If you are after a funny, very light-hearted book with a strong cast of female characters, this is definitely worth a look. It's another solid entry for Boom's growing range of similar titles. (3/5)

Under the cut: reviews of Action Comics, Daredevil, Detective Comics and The Power of the Dark Crystal.

The first part of "Only Human" felt a little underwhelming. This second and final part is much more dramatic and engaging, as Superman and Luthor's battle against the Machinist goes haywire when Luthor's Apokolips power suit begins to transform him and turn him against Superman. The action is strong, the resolution is satisfying, and an epilogue leads very boldly into the upcoming five-part storyline that finally reveals the identity of the mysterious "Mr Oz". (4/5)

The first 25 issues of Charles Soule's Daredevil run hit a pretty firm climax as Matt Murdock takes his case to the Supreme Court. His goal? To allow costumed heroes to give evidence in criminal trials without revealing their secret identities. Against him? Crime boss Wilson Fisk and his exceptionally well-paid lawyer. For an issue with no Daredevil action in it at all, it's a surprisingly effective and hugely satisfying climax. The legal arguments rendered as a martial arts fight was a particularly clever touch. The future for the title is already looking brighter. (5/5)

Spoiler has abandoned Batman, and taken up with the mysterious vigilante known as Anarky. Meanwhile Clayface struggles to maintain his form and intelligence. I've always been a huge fan of Spoiler, aka Stephanie Brown, and it's sad to see just how lost she appears to have become. She's mourning Tim Drake, presumed dead (although actually alive), and her rage at Batman seems to be leading her down a very poorly chosen path. Fingers crossed this is the experience that brings her back on-side again. (4/5)

The Power of the Dark Crystal #6

Thurma and Kensho continue their quest to take the crystal shard to the underground kingdom - but both are keeping secrets from one another. Meanwhile the Mystics convene together, while the Skeksis set a plan in motion. After such a strong start, the last few issues of this Dark Crystal sequel have felt a little underwhelming. It all snaps back into place here as the story reaches its half-way mark. Good characterisation and plotting is matched by strong colourful artwork. It is such a relief to see things get back on track - The Dark Crystal is a very special film to me, and a sequel comic needed to be as good as possible. (5/5)
Posted by Grant at 9:06 AM