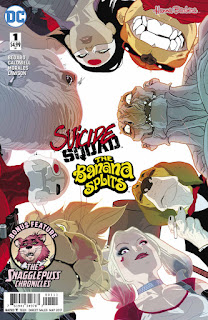 Recently DC Comics has undertaken a bizarre re-imagining of the Hanna Barbera cartoon properties, reworking children's entertainment from the 1960s and 1970s into odd re-imaginings aimed less at children and more at nostalgic thirty-somethings. Post-apocalyptic Scooby Doo has been a bedfellow with a Mad Max-esque Wacky Races and a cross-over Space Ghost/Johnny Quest mash-up. I have heard - but cannot confirm for myself - that their satirical new version of The Flintstones is actually very good, but to be honest the entire concept of these books do not interest me. A crossover between Banana Splits and Suicide Squad, however? That is a concept so completely wrong-headed and egregiously stupid that I felt compelled to check it out for myself.

More fool me. Suicide Squad/The Banana Splits is a train wreck in comic book form. Over-priced at US$4.99, its story by Tony Bedard is weak and superficial and its attempt to cross over the two properties takes the easy way out. It drags the look and tone of the Banana Splits aggressively towards Suicide Squad rather than work within the sharp contrast between the two properties. Ben Caldwell's pencils are generic and ordinary. There is a backup strip in the book's final third that launches another Hanna Barbera re-imagining - Snagglepuss as a gay 1950s playwright - but it is a little too short and simple to make any real kind of impact.

If you are going to deliberately produce a ridiculous crossover comic, it is important that you commit to the stupidity and make the most ridiculous comic that you can. Here DC pull their punches. Here they catch themselves in the middle. This book is garbage. (1/5)

Under the cut: reviews of Black Widow and Heathen.

Waid, Samnee and Wilson's run on Black Widow comes to an end as Natasha finally faces down fellow Soviet assassin Recluse and her six young protoges. This has been a patchy series for me, not helped by some delays along the run, but when it counts it all pulls together and makes for a very satisfying climax. After all, even when the story hasn't quite gelled together the way it should have, Waid and Samnee are two of the best in the business. (4/5)

Aydis is a young viking woman exiled from her village for being a lesbian, and is climbing a mountain to free the goddess Brynhild. I liked the first issue a hell of a lot, but I emphatically love the second. Talking wolves, magical horses, goddesses, valkyries, as well as snappy dialogue and beautifully restrained artwork all combine to make this an absolutely fantastic comic. While the 'chain-mail bikini' look of the characters should be a drawback, to be honest Altieri draws them in such a matter-of-fact fashion that it does not irritate me half as much as I figured it would. (5/5)

In the aftermath of the Borg attack, Commander Sulu rejoins Captain Kirk onboard the USS Endeavour. On their first mission they discover a rare 'white hole', with dangerous consequences for the crew. I really disliked the Borg storyline on this comic, which continues the adventures of the Kelvin timeline Enterprise crew immediately after Star Trek Beyond. Thankfully this new issue is a fresh, largely self-contained adventure with a nicely compact script and some fantastic old-fashioned artwork by Chris Mooneyham. I really hope Mooneyham sticks around: I could really get into a Star Trek comic that looked this good each month. (4/5)
Posted by Grant at 9:50 PM