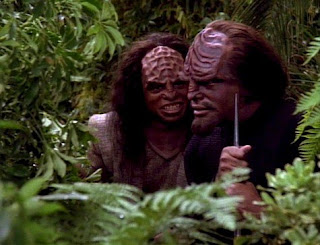 It is 1 March 1993, and time for another episode of Star Trek: The Next Generation.

While searching for his father, Worf (Michael Dorn) discovers a secret Romulan penal colony populated entirely by Klingons. Raised outside of the Empire and without the tutelage of their own kind, they have forgotten what it means to be a Klingon warrior. Captured by the guards and imprisoned alongside them, Worf takes their cultural education into his own hands.

The key fault of "Birthright" is clear once you view the second part. There is basically just a little bit more plot to the story that would fit into a single 42-minute episode. As a result the production team had two choices: condense and truncate, or expand and elaborate. Buoyed by the success of "Chain of Command" a few weeks earlier, the production team went with expanding. I think they made the wrong choice. While the first half, padded out by Data's learning to dream, had some genuine good material, the second half is just a chore.

One big problem is that the entire momentum for Worf's quest is to find out if his father is alive. Being taken prisoner would be a tremendous dishonour in Klingon culture, one that would not only destroy the reputation of Worf's father Mogh but also Worf and Worf's own son Alexander. It is a very personal mission for Worf and one that could bring up a huge amount of drama and conflict. Instead he learns within minutes that his father did die in battle at Khitomer, and that his family honour is preserved. With that discovery away runs most of the dramatic potential of the episode. All that is left is Worf belligerently goading the Klingon prisoners into abandoning their relatively content and peaceful society for the one he wishes to impose upon them.

Michael Dorn is a great actor, and an episode entirely based around Worf should be a good one, but the screenplay simply lets it all down. There's remarkably little tension, and any threats in the episode seem half-hearted. Worf has spent the whole series being actively and violently anti-Romulan, and there was a chance here to challenge his pre-conceived notions, yet the episode shies away. It all just feels remarkably half-hearted in every respect.

A ball was dropped here. Conceptually speaking the episode should work. The cast are solid. The execution just folds. It's tremendously disappointing. With 11 good episodes out of 17, the quality ratio drops to 65 per cent.
Posted by Grant at 7:45 AM