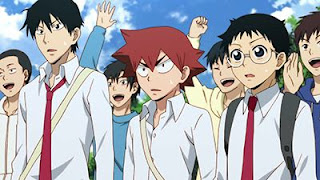 The day after their special training sessions, the first years discover that the senior classmen have all travelled in secret to the preliminaries of the Inter-High Championship. Not wanting to miss seeing their schoolmates compete, Onoda, Naruko and Imaizumi sneak out of school to see the race. When they arrive, they discover the Sohoku team trailing in third with 50 seconds between them and their competitors.

To an extent this episode feels like an epilogue to the first 10 episodes, since it sets up the Inter-High Championships and gives a brief taste of the rival cyclists and teams that the protagonists are going to face. On the one level it's a nice piece of set-up. On another it makes the episode feel relatively redundant, since it is just sign-posting stuff the audience is going to encounter in due course anyway.

The annoying aspect of the episode, particularly in its final few minutes, is that it teases a few too many new characters at once. There is a sense that the viewer is supposed to begin learning who they are straight away, when to be honest there are already quite a few characters to get to know even at this comparatively early stage. On the other hand the central racing sequence is an entertaining one, and showcases the senior riders' exceptional skills. It is, all-up, an uneven mixture of the good and the bad.

The episode draws a lot of humour out of comparing Naruko and Imaizumi: both fiercely competitive and driven, they keep winding up saying and doing the same things. It is a neat running joke, albeit one that risks running thin if it extends beyond this half-hour. Onoda spends the episode as his typically quiet and upbeat self. There's no real character development or insight here for any of the cast, just developments in plot.

It's a watchable episode, but a flat one, and in the end for me it slipped narrowly into the 'bad' pile on the standard good/bad ratio. With seven good episodes out of 11, the quality ratio slips slightly to 64 per cent.
Posted by Grant at 4:51 PM