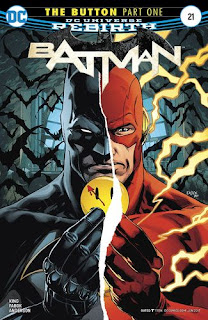 When DC Comics undertook a soft reboot last year with DC Rebirth, one of the most contentious elements was the foreshadowing of Alan Moore and Dave Gibbons' hugely popular and influential miniseries Watchmen colliding with the DC Universe. The key part of that foreshadowing was Batman's discovery of the famous Watchmen smiley-face button embedded into the wall of the Batcave. It's been almost a year, but Batman #21 finally returns to Batman's discovery in the four-part crossover with The Flash, "The Button".

While examining the button, Batman places it on a table next to Psycho Pirate's mask - something else he has been investigating - and an electrical flash allows him to temporarily see his father Thomas as Batman (from the 2011 crossover Flashpoint). He is then unexpectedly assaulted by the presumed-dead Reverse Flash, and must fight to survive the super-fast villain for 60 seconds until the Flash can come to the rescue.

There are positive ways to view this issue: Jason Fabok's art is great, and Tom King does an excellent job of both telling an action scene sliced down to second-by-second moments and of echoing the Watchmen aesthetic with a nine-panel layout. It also feels good to see the over-arching mystery of the DC Universe, the missing five years and the events of DC Rebirth finally start moving again - the Legion of Superheroes gets some positive foreshadowing for one thing.

Then there is the downside. No matter how well King writes this issue (and he writes it very well) the fact remains that combining the DC Universe and Watchmen is a catastrophically bad idea. One is a critical comment upon the other, which doesn't suggest there is anything to creatively gain from merging them. There is also the issue of cracking open a self-contained work to scoop out the IP inside (never a great look), and given the highly contentious manner in which DC has shut Moore and Gibbons out of their own work it does not exactly speak highly of DC's attitute to creators' rights.

At any rate, the storyline is here assuming you can stomach it. It is well written and well illustrated. It points to something that will very likely awful. Make your own choices. (3/5)

Under the cut: reviews of All-Star Batman, Aquaman, Batwoman and Daredevil.

"The Ends of the Earth" concludes with an action-packed climax in Washington DC, as Batman races to prevent the mastermind behind all of the previous attacks from unleashing his final devastating strike. The art by Jock is fantastic and distinctive, the pace is fast and desperate, and the identity of the ultimate villain both makes sense and enhances the story as a whole. It has been a really interesting story arc, told essentially via four vignettes rather than a continuing storyline. A lot of jumps were made in the story in order to transform it into four separate confrontations with four separate villains. Given the age of the property it's not often you encounter something genuinely original in Batman; I feel like we got something here. (5/5)

While the Aquamarines defend themselves from the potential return of Dead Water, Aquaman and Mera dive deep into the 'strange water' to discover the source of the threat. That source - a portal leading to an ocean planet somewhere on the other side of the universe - is one of the best ideas I've seen in Aquaman for a while. Solid art, great ideas and a strong script all combine to make this the best issue this book has enjoyed in a few months. (4/5)

Issue #2 of Batwoman is solid and enjoyable without managing to be exceptional. Kate Kane has returned to the island of Coryana to find one old associate dead at her feet, an ex-lover missing, and a murderous villain known as the Knife trying to kill her. The issue builds on character and particularly backstory via flashbacks, but it ultimately feels a little pedestrian; I'm not getting anything distinctive or original here to get me to commit to the long haul of a monthly Batwoman comic. (3/5)

The flashback storyline "Purple" continues in a slightly surreal and unusual issue as Daredevil struggles to control his mind when confronted with the mind-controlling sociopath Killgrave. The story is progressing much more slowly than I had expected; I honestly thought this flashback sequence would be maybe one issue long, but instead it's stretching to a whole trade paperback's worth. Marc Laming's artwork is good, but the story simply isn't grabbing me as much as I feel it should. I want answers to Matt Murdock's current status quo, not yet more mysterious action. (3/5)
Posted by Grant at 11:42 PM