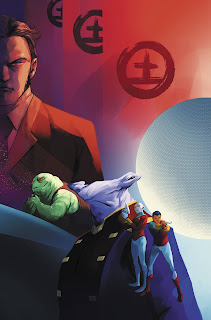 Joyride kicked off with two wayward teenagers escaping a totalitarian planet Earth, hitching a ride on a spacecraft and going to explore the galaxy. Now it turns back: the cast has expanded, with four humans on the team, and they have decided it is time to re-introduce Earth to the rest of the galaxy and overthrow the despotic regime that controls the planet.

It's a plot development that carries a lot of narrative weight, since it reverses the 'running away' motivation that drove the first story arc. It also makes this a pretty fast-paced, energetic sort of issue as a lot of story gets told in a very brief amount of time. It's almost too brief: a slightly slower pace might have allowed events to carry even more weight than they already do.

The scripting is strong as always, as is Marcus To's wonderful artwork and designs. Irma Kniivila's colours always make this comic a visually rich reading experience, and certainly this issue is no different. This continues to be a hugely entertaining science fiction adventure comic. (4/5)

Under the cut: reviews of Divinity III: Stalinverse, Hadrian's Wall, Justice League of America, and Ladycastle.

Valiant's big parallel universe crossover hits its explosive climax, which rapidly boils down to a conversation - because how else can you conclude a fight between two immortals with essentially unlimited power? To an extent this issue feels as if Kindt wrote himself into a corner and could not really find a way out. It is solidly written and nicely illustrated, but after some really strong work in the early issues this conclusion feels like a bit of a letdown. It is that frustrating combination: a book that is good, but also disappointing. Still there are some nice moments and panel transitions that help the book along. (3/5)

Back after a short hiatus is Hadrian's Wall, a murder-mystery set aboard a spaceship. The ship has now been taken over by anti-Earth rebels, with a pile of new information only making the truth behind the murder more confusing and elusive. The real strength of this book is the 1980s design aesthetic: visually, and Rod Reis' artwork is really exceptional here, the book resembles some sort of film project from people behind the likes of Blade Runner or 2010. (4/5)

It is somewhat ironic that a comic titled Justice League of America is spending the bulk of its first story arc in Eastern Europe. This comic, which currently featuring Lord Havok and the Extremists taking over a small European republic and Batman leading a resistance against them, is enjoyable but unnecessary. The biggest task Steve Orlando has with this book is explaining to the readership why it needs to exist when there's already a Justice League comic coming out every month. Thus far it doesn't feel like he has managed to do that. (3/5)

There is a whimsy and general silliness to Ladycastle that makes it quite an endearing read. It's set in a medieval castle where the King and most of the men have been brutally slaughtered by a dragon, leading the local blacksmith's wife to become elected king and the entire community - now run by women - to democratise and improve things while defending the castle against monster attacks. This issue it's a horde of werewolves. It's sweet without being exceptional, but I do suspect there's a target audience out there that will love it to pieces. (3/5)
Posted by Grant at 12:54 PM