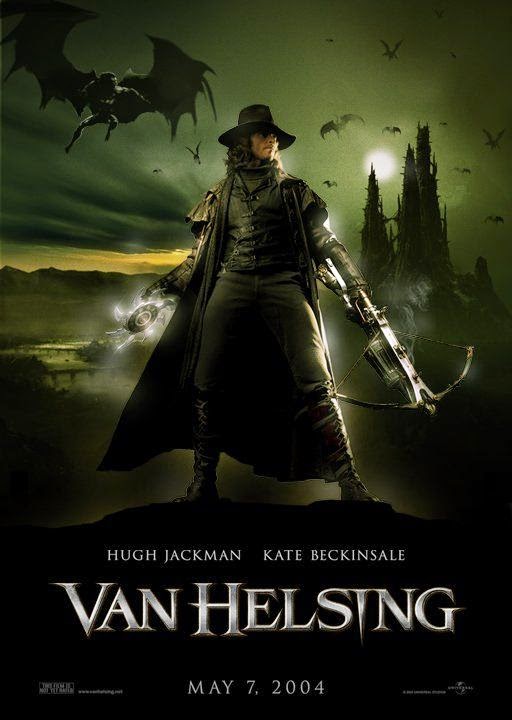 I'm away for a week and a half, so in my absence I figured I would dig out some older Angriest reviews from earlier versions of this blog - so if you feel you've read this before you have, about a decade ago. Let's have a look back at Stephen Sommers' much-hyped fantasy film Van Helsing, which I reviewed back in mid-2004.

Stephen Sommers is a director with a strange transitional state to his film-making style. It's like there are two lines, one heading diagonally down as time goes on, and one headed diagonally up. As his skills in one area improve film by film, the other gets worse and worse, until he has almost become the exact opposite director that he started out as. He started out in Hollywood with The Adventures Of Huck Finn and The Jungle Book in 1993 and 1994 respectively. Both were fairly simple, unambitious films, but they were tightly made and fairly well written. Four years later Sommers returned with Deep Rising, a rollicking monster b-movie. It's a vastly underrated gem of a movie, and possibly Sommers' best work. It combines the tight writing and direction of his earlier films with some great Hollywood action set pieces and visual effects. Sure, it was a lot messier than his earlier movies, but it was certainly a hell of a lot more fun. This was the movie that set the trend, as far as I'm concerned.

With 1999's The Mummy and its sequel The Mummy Returns, the set pieces got bigger, the production design and visual effects got more inventive, but the writing got lazier and lazier. The Mummy Returns was a veritable curate's egg: the individual scenes and characters were great, but the film as a whole felt thrown together in the most haphazard of fashions. (When I first typed that sentence, I strangely typed "hell" instead of "whole". Not sure there's not something Fruedian going on there.)

Any hopes that Sommers' latest film, Van Helsing, was going to break away from this unfortunate transition were dashed pretty quickly. If anything the film is even more incoherent than its predecessor. Again, all the individual components are great - some of them are incredibly striking - but compiled together the film collapses under the immense weight of its many elements and excesses.

Let's start at the very beginning. It's what Julie Andrews recommends in The Sound Of Music, and who are we to argue with a nun? The pitch for Van Helsing reads like an executive bunny's wet dream: Dracula vs Frankenstein vs The Wolf Man vs Dr Jekyll and Mr Hyde. After all, if Sommers could make Universal Pictures half a billion dollars remaking just one 1930s horror icon, imagine how much money he could rake in by remaking four at the same time! It's a ridiculous exercise in mathematics used only by Hollywood executives: they can count, but they're not remotely creative, but they think they are, and so a perverse form of logic evolves in which increasing the number of elements from one proven success will theoretically increase its profits. Batman, for example, featured one villain and one hero. By the third sequel Warner Bros had worked their way up to three of each. To be fair, it sometimes works: Aliens made quite a bit more than Alien. More often than not, however, it's a crazy recipe for disaster, and the crazier thing is that no matter how many times Hollywood fails in an attempt to prove that "bigger is better", they'll always look to the one hit in twenty and think they're onto something. And in the case of Van Helsing, this aggressive over-egging of the pudding makes the film a failure before it's even started. So much effort will be expended during the film trying to shoe-horn each monster into each other's universe that there won't be any room for an actual story.

To be fair, Stephen Sommers takes a damn good swing at hitting a good script with the ridiculous quantity of character's he got to work with. Having Dracula fund Dr Frankenstein's research so that he can bring his dead children to life is actually a fairly clever idea. The problem is that in an ideal film this idea wouldn't have to be made. Having Dracula use werewolves as henchmen also works fairly well as a means of getting the Wolf Man into the picture. Unfortunately, with three immortal vampire brides who are as lethal as werewolves and have the twin advantages of being able to fly and retaining their powers when the clouds cover the moon, one does question why Dracula would even bother.

Meanwhile, Van Helsing gets a new identity and a new first name, taking him away from Bram Stoker's original character and brought closer to a sort of Victorian era cross between Indiana Jones and Wolverine. This is actually not a bad thing at all: the name by itself is cool and iconic, and it's obvious from every other element of the film that this is by no means an adaptation of Stoker's novel. Making Van Helsing a brooding, immortal vampire hunter with that coat and that hat does make him dangerously similar to Vampire Hunter D, but it's not like Hollywood hasn't skirted the edge of plagiarism like this before, and there are enough crucial differences in evidence to give Sommers the benefit of the doubt. Van Helsing works as an unwilling mercenary/assassin for the Vatican, which is another idea that I really like, and is sent on a special mission with friar sidekick Carl (a sort of proto-Q for a proto-James Bond) to Transylvania to help kill Dracula once and for all. Once there, it's down to Van Helsing to aid a beautiful gypsy vampire hunter in hunting down Dracula and his three brides, rescuing Frankenstein's monster and preventing the thousands of vampire spawn from coming to life and destroying the world.

I was going to write a point-by-point critique of why the script to this film is so bad, but about half an hour of movie in I'd written over a thousand words. Here's the quick, faster version. No one seems properly motivated in this movie. Dracula wants to bring his thousands of little vampire babies to life. Why? They look like flying gremlins and have no conversational skills. The count demonstrably has a thousand-odd vampire buddies to chat and hang out with in Budapest. Why spend so much time and effort revivifying something so ridiculously small and stupid? He's like an old lady who wants to stop talking to other humans and spend time with her cats.

Hundreds of years ago, Dracula's own father tried to kill him but couldn't bring himself to do it. So he spared his life - and left bizarrely cryptic and arcane clues behind for someone else to do it for him. Either the guy wanted his son to live or not. Spending twenty years developing a complex way for a descendant to do it instead is just... weird. Lots of time gets spent early in the film setting up a creepy gravedigger as some sort of important character. Then he suddenly tries to kill Van Helsing and dies. There's no explanation. There's no motivation. Why bother? Who needs motivation when you're charging into the next action scene?

Good screenplays work on foreshadowing. To be more precise, good screenplays work on good foreshadowing. The way that the lightning strikes the clock tower in Back To The Future is an example of foreshadowing well. Having Carl the Friar show the audience what is essentially a sun in a jar in a movie we know stars vampires is very, very damned sloppy. The only thing that can kill Dracula is a werewolf. (Kate Beckinsale must've had major Underworld flashbacks at this point.) Why? No explanation is given, and I'll be damned if I could think one up. As far as I could make out, it was so that Hugh Jackman could turn into one and give the audience a big vampire versus werewolf finale. This wasn't a clever idea. After investing two and a half hours in Hugh Jackman's portrayal of Van Helsing, we really don't want a climax involving two duelling visual effects. This again is very bad writing.

There are a ridiculous number of holes in Sommers' screenplay, and to be honest it plays out like a very rough first draft that never received any editing. After all of these complaints, I guess it looks like there's not much to recommend in Van Helsing at all. But there is. Sommers has always been a great director for little details and touches. Mr Hyde is brilliant. David Wenham's performance as Carl is delightful, and you can feel how much fun the guy's obviously having in such an over-the-top role. The same goes for Richard Roxborough's Dracula and Kevin J. O'Connor's Igor. The costumes are, on the whole, pretty neat. Hugh Jackman makes for a great action hero: I'd love to see him directly tackle an Indiana Jones-style role some day.

You'll probably have some fun watching Van Helsing. Half the time you'll laugh with the film, half the time you'll laugh at the film. At the end of the day, though, I really have to question why we should have been watching it at all. As I've argued before - and I'm more guilty of this than anyone - we're only going to continue getting shit from Hollywood for as long as we keep paying to see it.
Posted by Grant at 9:00 AM