Doctor Who: "The Sea of Death" 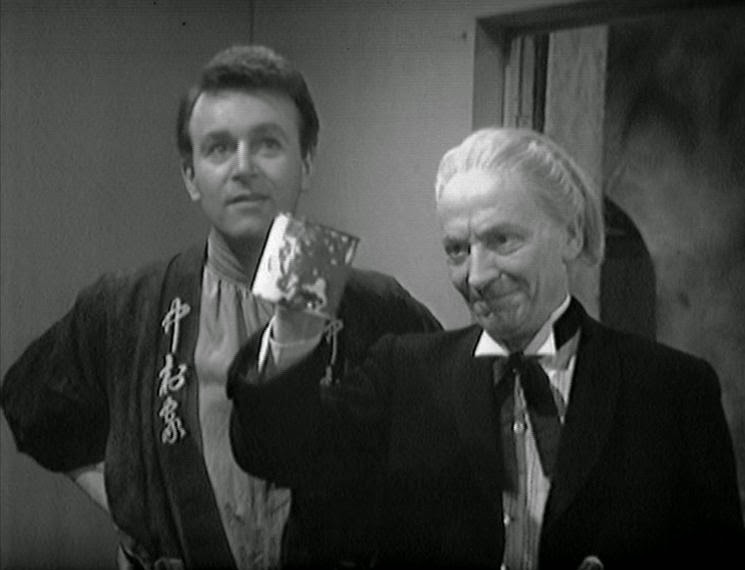 The TARDIS arrives on a deserted island made of glass. Susan almost paddles in a rock pool of acid; it turns out the entire surrounding ocean is highly acidic. At the centre of the island they find a mysterious pyramid. Inside a man named Arbitan defends the mind-influencing Conscience of Marinus from the invading Voord. With no one else to call upon, Arbitan blackmails the Doctor and his companions into a mission to recover the four missing keys that will operate the Conscience and defeat the Voord.

Wait a moment: the TARDIS arriving on a seemingly dead planet? An vividly transformed landscape? A mysterious building in the distance? Deadly aliens lurking around the scene? We already watched this episode a few weeks ago. It was titled "The Dead Planet" and was written by Terry Nation. He should have sued whoever wrote this plagiari- oh wait, this is by Terry Nation as well, clearly expressing a focused style of creativity where he's now essentially sold the same episode to the production team twice.

It's nowhere near as effective the second time around. There is some aesthetic appeal in a glass island on an ocean of acid, and certainly it speaks to a sort of old-fashioned science fiction adventure that does have some appeal. The Voord, however, are just weird men in wet suits with silly helmets - and the episode never makes it clear whether the weird helmets are helmets with human faces inside, or if these invaders are actually some kind of alien.

After getting some well-deserved characterisation in "Marco Polo", Susan is back on form as a one-dimensional teenage screamer. Ian and Barbara come across as much more assured and interesting, with both William Russell and Jacqueline Hill giving strong performances. By contrast William Hartnell is all over the place, stepping on his co-stars lines and repeatedly fluffing his own. Technically speaking the episode is a bit of a mess as well, whether it's the hilarious little paper Voord falling to his death or Carole Ann Ford walking right through the invisible barrier William Russell has gone to great pains to mime.

This episode boasts what is probably the series' first big-name guest star, in the shape of Mercury Theater veteran George Coulouris as Arbitan. He comes across as a little bored, to be honest, but then again I'd be bored performing these sorts of clichés as well. He exists purely to set the Doctor and his friends off on a quest to collect plot coupons: find four keys and they can return to the island and exchange them for an ending.

This is almost certainly the least satisfactory episode of Doctor Who's first series so far: clumsily produced and directed, written with indifference and wholly unsatisfying. I only hope the rest of "The Keys of Marinus" improves. 15 good episodes out of 21 leaves Series 1 with a quality ratio of 71%.
Posted by Grant at 9:04 PM