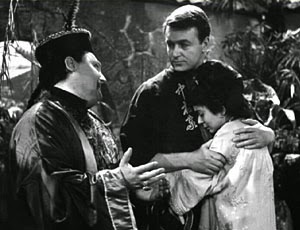 It's 28 March 1964, and time for Doctor Who. Once again the Doctor's attempts to escape from 12th century China have failed. Back in the custody of Marco Polo, the Doctor and his companions are taken to the summer court of Kublai Khan - with surprising results. Meanwhile Ian persuades Marco to let him leave the caravan trail in pursuit of Ping Cho, who has fled the camp for fear of Marco's recriminations.

After a disappointing fifth episode, "Marco Polo" picks up considerably in the sixth. We've heard Kublai Khan's name every episode this serial as Marco's caravan has progressed closer and closer to him. Now that we meet him, he's something of a surprise. Everything to this point has suggested a powerful, sword-wielding warrior king, and instead the Doctor is confronted with a small, elderly figure wracked with the pains of old age. Much to everyone's surprise, he and the Doctor hit it off immediately.

The Khan seems most worried about the massing army of rival Mongols on his border. He wants an explanation from Tegana, but of course Tegana is nowhere in sight having left Marco's camp to look for Ian, who has in turn left to look for Ping Cho. Ian finds Ping Cho without difficulty, but she's been robbed - and searching for the robber reveals that Tegana has had the TARDIS stolen. Ian's desperate search to retrieve it brings him to the episode's cliffhanger ending - and a potential sword duel with Tegana.

This is very much Ian's episode, and William Russell excels. This sort of chivalrous adventure is something he was well experienced in, having previously starred in The Adventures of Sir Lancelot for ITC. That said, it does beggar belief somewhat that he's going to make any kind of challenge to a trained soldier in a sword fight. He may a rough-and-tumble athletic type, but he is still a high school science teacher. It's clear that this serial can't have long to go, because it's going to be all-but-impossible for Tegana to maintain his innocence to Marco and the Khan after all of what happens here.

Martin Miller gives a nicely comedic performance as Kublai Khan, albeit with the usual caveat that it's an English actor playing a Mongolian in yellowface. It is a wonderful little twist to reveal the Khan is as old as he is, and of course it's historically accurate: in 1289 he would have been 74. The real Khan died five years later.

A little bit of light comedy mixed with Ian's solo adventure help make "Mighty Kublai Khan" the shot in the arm that this serial needed. It gives Series 1 its 15th good episode out of 19, and a quality ratio of 79%.
Posted by Grant at 7:29 AM