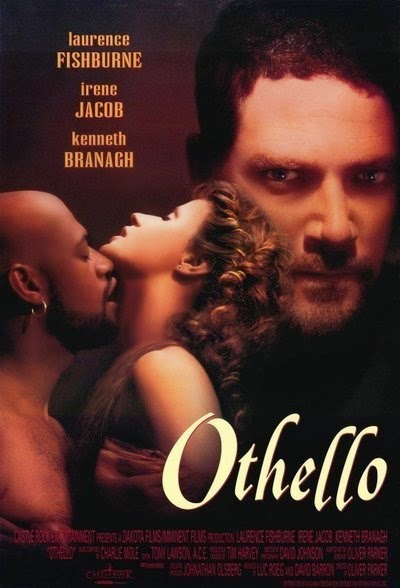 I remember Oliver Parker's Othello being a slightly controversial film when it was originally released. It was an adaptation of William Shakespeare's The Tragedy Of Othello, The Moor Of Venice that dared to gut roughly two-thirds of Shakespeare's dialogue from the text. Such radicalism isn't easily tolerated by the Shakespearean elite, and Parker's film stumbled beneath an earthshaking wave of criticism. Film critics, rather than literary critics, were a little more forgiving, but this movie still got pretty harshly condemned as a dumbed-down, populist re-telling of the classic tragedy.

They were wrong. Othello succeeds where many other Shakespearean adaptations fail by realising that what works in the theatre in the 16th century does not necessarily work in the cinema 400 years later. It uses Shakespeare's text economically, ensuring that while being a faithful version of the play it is also a thrilling motion picture in its own right.

Parker succeeds in no small part due to his excellent cast. Laurence Fishburne made history here as the first black actor to play Othello on screen. That's a jaw-dropping realisation: that people have been performing this play for a century in film and television, and it took until the 1990s for a person of colour to perform the role. The politics of blackface make all previous versions all-but-unwatchable, so it's so good to have at least one version to watch that has its dignity intact. Fishburne is great, bringing a wonderful charisma and a valuable depth to a difficult character.

Irene Jacob makes a fine Desdemona, but it's Kenneth Branagh who steals the show. He is possibly at his most entertaining ever as Othello's comrade-in-arms Iago, and that's important because while the play is named after Othello it's actually Iago who is the star. What Branagh and Parker have absolutely nailed is the film's use of direct address. Direct address was a core aspect of Elizabethan theatre: the actor could explain their woes or intentions directly to the audience. In the more naturalistic form of cinema, such direct address would intolerably break the fourth wall - except Parker does it anyway, and with a combination of quiet confessions or dark glances down to the barrel of the lens Branagh makes us complicit in Iago's treachery.

This is a great movie, and a great adaptation of Shakespeare's work. It sort of got forgotten in the past 20-odd years, as audiences responded to bolder adaptations like Baz Luhrmann's Romeo + Juliet or Branagh's own Hamlet. It still holds up very nicely though: short, to the point, beautiful performed and shot.
Posted by Grant at 9:00 AM