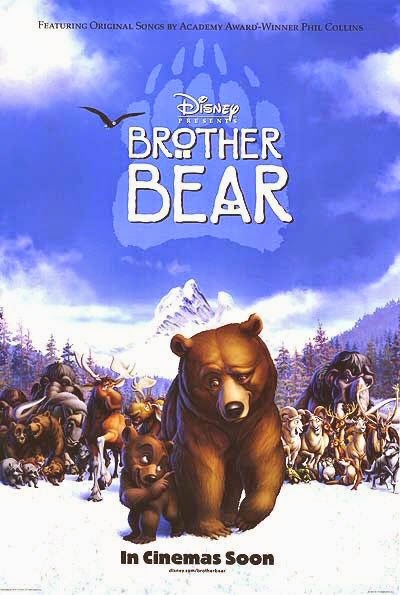 Brother Bear, from directors Aaron Blaise and Robert Walker, is the tale of a native American hunter who is magically transformed into a Walt Disney cartoon.

Okay, so he's actually transformed into a bear, but the transformation in both look and direction for the film when does become the animal is both unexpected and highly inventive. The film begins with a distinctive, oddly non-Disney visual look. The colour palette is muted and dark, and the character designs - particularly the first bear we encounter - are quite realistic compared to traditionally animated American films. For the first fifteen minutes of the film there is an adult tone that seems quite out of place for an already declared "Walt Disney Classic". I would certainly think twice before introducing younger children to this movie.

Then our protagonist turns into a bear, knocked unconscious and when he wakes, a quite startling change has taken place. All of the animals, previously naturalistic in design, are suddenly classic Disney caricatures. The colour palette, previously dark and muted, is suddenly very colourful and vibrant. Most unexpectedly of all, the aspect ratio of the film itself has changed from Disney's usual 1.85:1 to an immense 2.35:1. It gives the remainder of the film a vast, glorious appeal that is very easy on the eye - not to mention reflective of the story's broad, rugged landscape.

The rest of the film is pretty much what you expect from Walt Disney. The characterizations are strong and appealing (and readily marketable), the story is predictable but comforting, and one or two moments will probably have one or two of you a little teary-eyed by the end. The voice acting is up to the usual standard, with Joaquin Phoenix taking the lead and Strange Brew stars Rick Moranis and Dave Thomas pairing up again as two doped-out moose.

If there's anything in this film to outright criticize, it would be the songs. Disney haven't made an all-out musical production since Mulan, but their reluctance to sever the ties to the old days has once again resulted in a bunch of songs played over the action from time to time. Phil Collins returns after a successful performance in Tarzan, and to be honest his music is unnecessary and unwelcome. This wishy-washy semi-musical angle is damaging to the films it's used in. It's notable that later Disney animated films either went full musical (Tangled, Frozen) or full non-musical (Wreck-It Ralph, Big Hero 6) without any more attempts to do something in between.

I remember being quite sad when Brother Bear was released, because it appeared at the time to be Disney's second-last original animated production. Disney chief Michael Eisner seemed intent upon scuttling original animated product in favour of CGI and sequels, and with Home on the Range already generated poor word-of-mouth Brother Bear seemed like the last gasping hurrah of a Hollywood legend. How times changed. A decade later and traditional animation may still be dead (their last traditionally animated picture was Winnie the Pooh), but Disney is going stronger than ever.
Posted by Grant at 9:00 AM