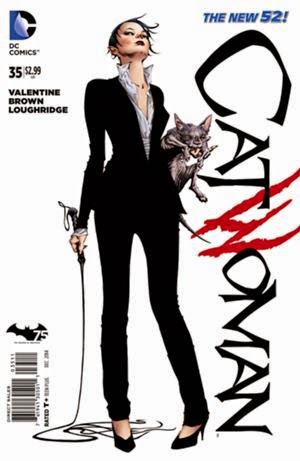 I always get mildly annoyed when one of the big two publishers - and it's usually Marvel - relaunches and renumbers a comic book every time it has a significant change in creative team or direction. In some cases, as with Daredevil, they don't even need those excuses: they just relaunch and renumber anyway. There used to be something nice about reading issue eight hundred and something of Detective Comics. It demonstrated a legacy and a rich history that Detective Comics issue twelve doesn't really express.

As a result I'm always happy when a book gets a fresh look, team and direction, yet keeps the current numbering. Next month DC do it with Wonder Woman #36, but this month they're doing it with Batgirl and now Catwoman #35. New creative team, a new narrative direction, but still the same comic and lead characters.

Catwoman #35 by writer Genevieve Valentine, artist Garry Brown (The Massive) and colourist Lee Loughridge, sees Selina Kyle assume control of one of Gotham City's most powerful crime syndicates and start to rebuild the city - both its physical infrastructure and criminal underworld - in the wake of Batman Eternal. Basically it's The Godfather, with Catwoman instead of Al Pacino and with both Batman and Black Mask lurking around in the background.

It's a very smooth transition to the new status quo, told with clarity and maturity, and thankfully without the fairly overt skeezy sexuality that has plagued this book since it relaunched in 2011. Garry Brown is a great artist; I've loved his work on The Massive and I'm very happy to see him applying his extensive talent here. Altogether it's an impressive package and, alongside Gotham Academy and the reworked Batgirl, is doing a great job of diversifying and energising DC's massive line of Batman-centric comics. (4/5)

Under the cut: reviews of Aquaman, Batman Eternal, Deathstroke, The Flash, He-Man, Infinity Man and the Forever People, The Multiversity, Predator, Revival, She-Hulk and The Wicked + the Divine.

This is the best issue of Aquaman in a long while, diving (pun intended) into the culture and landscape of Atlantis and building cleverly on plot threads from the past few years of this comic. Atlantis keeps experiencing earthquakes when Arthur is around, and to get to the bottom of the mystery he's bringing two human scientists down from the surface to help. This issue showcases an awful lot of Arthur the King, and by surrounding him by his subjects and companions this issue is really playing to the book's strengths. (4/5)

Some time ago now Batman Eternal was following a plot thread in which Jim Corrigan and Batwing infiltrated Arkham Asylum and finding all manner of supernatural goings-on. The thread seemed to be dropped, rather abruptly, but yet here it is again, picked up as if it only happened an issue ago. It didn't. This is following up on stuff that happened about 24 issues ago, as if barely a minute has passed between the two. It's seemed like weeks have passed in the rest of the narrative, begging the question on what the hell Batwing and Corrigan have been doing. What did they eat? Where did they poop? This is some crazy incompetent plotting, either despite the series having five writers or because of it. The whole thing reads as if someone suddenly noticed a ball had been dropped, so the team did a mad scramble to pick it up. (2/5)

DC released a new Deathstroke monthly back in September 2011, as part of the New 52 launch. It was a fairly enjoyable book at first, but then falling sales led DC to replace original creatives Kyle Higgins and Joe Bennett with Rob Liefled. When sales declined ever further, the book tapped out at issue #20 in July 2013. So now we're 15 months on and DC are unexpectedly doing their best to float Deathstroke again: this new version features story and art by Tony Daniel, whom I've always admired as an artist but felt underwhelmed by as a writer. This issue doesn't do much to change that opinion. It looks decent, if a little gory, but storywise it feels reheated and overly familiar. It's not a bad comic by any stretch - but did we need to see it come out so soon? I'm aware the character's gained some recent exposure via the TV series Arrow, but I'm still not convinced. (3/5)

After an interminably long build-up, the Flashes of the present and future finally cross paths, and it's a predictable combination of fist-fight and conversation. Just when the cliches couldn't get more overwhelming a third Flash shows up ("I'm the Flash from the double-double future - I'm the Flash who's with the Lister who married Kochanski.") to complete the whole sorry mess. The issue ends with the future Flash in the present and the present Flash lost somewhere in time, but quite frankly I find it difficult to care. It may be time to stop reading this book until a new set of writers jump onboard. (1/5)

He-Man and the Masters of the Universe #18

It's taken 18 issues, but there's an immense catharsis in seeing Adora finally accept her destiny, say the magic words and return as She-Ra the Princess of Power. It's a "child of the 1980s" thing I suppose, but I was genuinely excited to see the lead character of one of my favourite cartoons return. I really loved this issue's cover as well. There are more than a few exciting moments and images in this issue to please nostalgic readers. Goodness knows what you'd make of it if you weren't already invested in the franchise. (3/5)

Infinity Man and the Forever People #4

The sales have made it clear that Infinity Man and the Forever People is a dead book walking, and this book either proves why it's not selling or is a sign that Didio and Giffen have given up on even trying to make it popular. This issue meanders about aimlessly with the cast trapped on Earth and headed on a road trip. There's a pointless Batcow cameo in the beginning and a pointless Guy Gardner cameo at the end, and the middle all feels rather pointless as well. To be honest I've completely lost track of what this book is aiming to do. (1/5)

The Multiversity: The Just #1

First up: Ben Oliver's artwork is absolutely gorgeous. I think this is easily the prettiest comic book of the week. Secondly: it's a genuine pleasure to read a DC superhero book populated by Kyle Rayner, Kon-El, Wally West, Connor Hawke and all of the other second-generation heroes that DC editorial have worked to eliminate or sideline over the past decade. Thirdly: this is a really well-written issue, in which Morrison explores a world in which superheroes are no longer needed and simply spend their lives living as aimless celebrities. I am really enjoying The Multiversity. Each issue is it's own little one-shot, while building towards a massive universe-crossing crisis. It's stunning work by all involved. (5/5)

In the aftermath of... oh I have no idea what order these Fire and Stone series are supposed to be read in, three men escaping on a spaceship discover they have a deadly hitchhiker in the ship's hold. Despite the messy and excessively interconnected nature of these books, this issue actually holds a bit of promise. It's tightly written, and pretty much does what it says on the tin: three men getting hunted down on their own ship by a Predator. The usual caveats apply: you'll enjoy this more if you're already a fan of the Predator movies, otherwise there are probably at least a dozen books this week you could be better served in reading. (3/5)

Back to Wisconsin we go, where things only seem to be getting more complicated and troublesome. This issue feels very much like the beginning of a fresh arc: a romantic affair heats up, undead deer are rising up from the rivers, religious zealots are moving in on the town, and someone's buying up explosives. More than any other comic on my list this feels like a television series translated to comic book form, and I suspect (and hope) it's only a matter of time before some enterprising TV network has the nerve to commission it. (4/5)

A family is suing Steve Rogers with a wrongful death claim, and Jennifer has taken the case to defend him. Representing the family? Matt Murdock, aka Daredevil. The Marvel Universe's two superhero lawyers finally get to face each other in court what I'm pretty certain is the first time. My overwhelming response: why has nobody thought of doing this before?! It's a sensational idea, and Soule writes the hell out of it. Javier Pulido's artwork continues to be stylish and very retro - exactly the sort of visual aesthetic these stories need. And, of course, Marvel are cancelling this book in the new year to make way for a fresh creative direction. I simply don't understand. (5/5)

This issue winds up the initial "Faust Act" in the best possible manner: shocking and unexpected at the time, and then blindingly obvious in retrospect. It successfully pulls off a remarkable feat in telling an engaging story over five issues and setting up a long-running monthly comic going ahead. Jamie McKelvie continues to be pretty much my favourite comic book artist working today, and he's working from a script by Gillen that absolutely plays to his strengths. The first trade paperback is out next month - I strongly recommend you give it a look. (5/5)