Doctor Who: "Assassin at Peking" 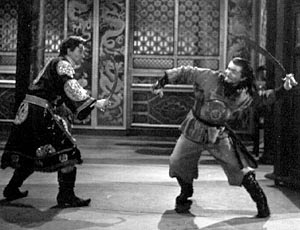 Kublai Khan has relocated to his palace in Peking. Ian and Ping Cho uncover Tegana's treachery, but still no one will believe them. The Doctor almost wins back the TARDIS and backgammon - only to lose it all in the final game. With he and his companions trapped in China, seemingly for good, and with Tegana's allies massing on Peking, things certainly look grim.

"Assassin at Peking" is, broadly speaking, a bit of a disappointment. It does what it needs to do in order to wrap up this epic seven-part serial, but for the most part it does it in a perfunctory and unsatisfying manner. With a few exceptions it's all rather forgettable. This is a shame, because much of the serial leading up to this climax has been great television drama, and it feels as if Lucarotti's script slips just at the moment when it should all pull together.

Credulity is stretched to breaking point when once again Tegana's treachery is exposed, yet no one in power believes it. Worse still, even disregarding the Doctor and his companions' warnings, what self-respecting monarch would willingly leave themselves undefended in their throne room with an old vizier and an armed representative of their arch-rival? Quite frankly if Kublai Khan is that naive he probably deserves to be assassinated.

There's some light comedy between the Khan and the Doctor in the episode's early scenes, as they happily gamble. The things the Doctor has managed to win on his way to winning back the TARDIS are genuinely funny - the whole of Sumatra, for example - and it does make for a nice change of tone from the more earnest dramatics of the serial as a whole.

There is one nice moment that sticks out from the rest of the episode. Marco Polo pauses by Tegana before he leaves, Tegana having successfully convinced the Khan that he's no threat and that it's Marco himself who should not be trusted. 'I underestimated you, Tegana,' warns Marco. 'No,' replies Tegana coolly, 'you overestimated yourself.' It's an oddly adult moment, one of many that's crept into this ostensible children's drama.

Altogether, however, this episode is a bit of a disappointment, and that's a deep shame because this has otherwise been the best serial so far. There's been an outstanding amount of quality dialogue here, and a nice regular change in setting and tone as well. Even the Chinese setting, while severely marred by putting Caucasian actors in yellowface, has been presented with integrity and a broad amount of cultural respect for the early 1960s. It leaves Series 1 with 15 good episodes out of 20, or a very healthy quality ratio of 75%. Next up is "The Keys of Marinus", by Terry Nation.
Posted by Grant at 5:00 PM