Star Trek: The Next Generation: "Allegiance" 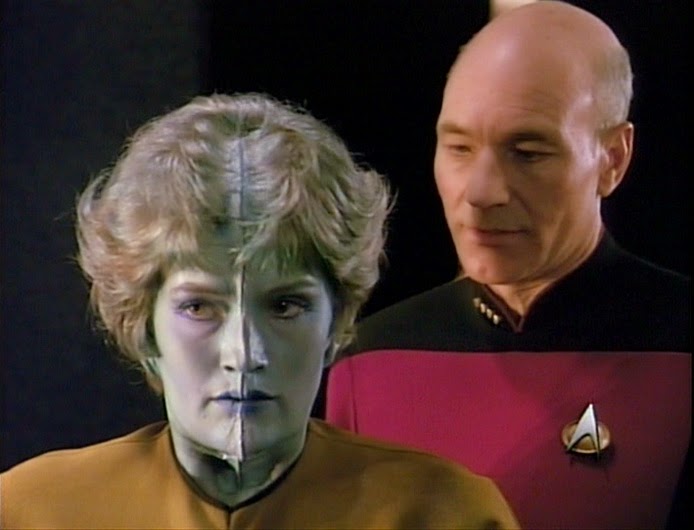 Captain Picard is abducted from the Enteprise, and wakes in a locked room with three alien companions. Meanwhile a duplicate of the captain remains on-board, and his erratic behaviour begins to raise the suspicions of the crew.

In the most basic terms, “Allegiance” is the episode you need to make if you want to also make “Yesterday’s Enterprise”. That episode was a remarkably expensive one, with plenty of visual effects sequences, set rebuilds and supporting actors. This episode looks Picard into a room with three people for a Sartre-esque character study. It’s a wonderful opportunity for Patrick Stewart, who gets to play two different characters at the same time, and it’s testament to his skills as a performer that he manages to make each Picard seem so different to one another without making the duplicate seem completely out of character.

Sadly, while it might have been a lot of fun for Patrick Stewart, the episode overall isn’t a great deal of fun for the viewer. The scenes on the Enterprise feel rather drawn out, and you’re left waiting for the characters to catch up with the audience – that’s never a good thing. There are some highlights – Dr Crusher’s dinner with the duplicate Picard revisits the regularly hinted-at romance between the two, for example – but in total there simple aren’t enough dividends for the time spent telling the story.

The real Picard’s plot thread also suffers, but that’s because of weak characterisation among the guest characters. If you’re going to spend an hour with four people locked inside a room, it’s critical that you make them interesting characters – and these ones are not. There’s the violent anarchic one with ridiculously cheap-looking prosthetic make-up, and the young meek one who does whatever Picard says, and the whining cowardly one who sits in the corner. I wanted a lot more depth and complexity than this, but instead I got cyphers and superficial stereotypes.

It seems like for every step forward this season takes there's a subsequent step back. We're 18 episodes in and 10 have been good: the quality ratio slips back down to 56% with eight episodes to go.
Posted by Grant at 9:00 AM