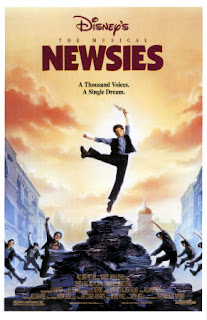 I have had a few conversations over the weekend about whether or not Newsies qualifies as an obscure movie any more. Two years ago such a claim wouldn't be in question: a live-action musical produced by Walt Disney Pictures, released into cinemas in April 1992, which subsequently crashed spectularly at the box office, earned only two million and sank without a trace. It didn't even receive a DVD release until last month. Now, of course, a lot more people know of the film because it's the basis of a Tony Award-winning musical on Broadway. I'm betting most of the people who have seen the stage musical haven't seen the film, though - I'd even bet a lot of them aren't aware that a film came first.

Newsies is loosely adapted on a true story, in which late 19th century newsboys in New York organise a strike when Pulitzer and Hearst raise the wholesale price of their newspapers. It was written as a non-musical family drama, but director Kenny Ortega - choreographer of Dirty Dancing and later director of the significantly more successful High School Musical franchise - had Alan Menken compose a bunch of songs and transformed the film into a fully-fledged musical. From watching the 'making of' featurettes on Disney's new 20th anniversary blu-ray, I get the impression the film was cast before it was turned into a musical, which must have made for some interesting conversations with the actors.

Christian Bale stars as Jack Kelly, the de facto leader of a gang of newsboys (or 'newsies'), who - inspired by an ongoing public transport strike - incites his friends to take industrial action when magnate Joseph Pulitzer (Robert Duvall, in a sadly non-musical part) increases the wholesale price of his newspaper. As the strike goes on, expanding all the time, Pulitzer uses his influence to pressure Kelly harder and harder until one of them is forced to break. Kelly gets support from journalist Bryan Denton (Bill Pullman), who advises the newsies on how to make the biggest impact with their demands.

Newsies is an odd musical, and it's clear when viewing it why it failed to find an audience in 1992. For one thing it was released in 1992, after the last gasps of the musical genre in the late 1970s but before it's revival in the 2000s. For another, it has a very unusual narrative for a musical. There's one romantic subplot, but it is heavily sidelined by the industrial action. There are only three female roles, none of which receive any significant screen time. Thirdly, the cast is comprised of what I assume are primarily non-musically trained actors. There's a lot of enthusiasm in the musical sequences, and the songs and choreography are great, but there's a slight roughness to their delivery. For me this gave the movie an extra level of charm, but I suspect other viewers may not be as forgiving.

There are quite a few familiar faces among the cast, including David Moscow (the young Tom Hanks in Big), Max Casella (Doogie Howser MD, Ed Wood), Ann-Margret, Deborra Lee Furness (Shame), Kevin Tighe (Lost, The West Wing) and Trey Parker (South Park). I always have fun actor-spotting in an ensemble cast, and Newsies is a great film for that.

Newsies isn't a hidden classic, but it's a solid and highly entertaining modern musical and certainly deserves the higher profile that its Broadway spin-off is giving it. As far as I'm aware it's never been released in Australia - I watched it on an imported US blu-ray (which is an all-region disc, so is easily playable here). If we're scoring out of ten, it's a solid seven. If we're scoring on a binary worth your time/not worth your time basis, then it's definitely worth a viewing if you ever get the chance. It's a Christian Bale musical. Batman sings. You'll need to be made of sterner stuff than me to pass that up.
Posted by Grant at 9:30 AM