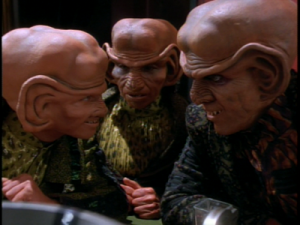 The Grand Negus of the Ferengi arrives on Deep Space Nine with a special trade mission into the Gamma Quadrant for Quark and his new employee Pel - but there's something about Pel that seems out of place.

Ah Ferengi. If there's one thing Deep Space Nine achieved that doesn't get enough recognition, it's how the series (mainly through writer/producer Ira Stephen Behr) took a one-note, irritating set of characters and actually transformed them into a three-dimensional, intriguing civilization with a culture and distinctive characters. The centrepiece of this transformation was of course Quark who, as a series regular, was given the time required to really flesh out his background and personality. Most importantly he became a quite sympathetic character without sacrificing any of the money-hungry, provit-motivated values that made him who he was. Quark is still one of my favourite characters in the whole of Star Trek.

One of the more interesting aspects of the Ferengi is how all of the non-Ferengi treat them. Put simply, Star Trek is just that little bit racist. It shouts its egalitarian ideals from the rooftops in every iteration of the franchise, while quietly having most of its regular characters treat the Ferengi as second-class citizens. At the beginning of Deep Space Nine Commander Sisko warns his son against associating with Quark's nephew Nog. Worse than that, the actual franchise itself would seem to be somewhat bigoted - unless depicting the Ferengi with big ears and noses, giving most of them New York accents and having them obsessed with greed and money was all a wild coincidence. (I find it interesting that whenever the Ferengi's similarity to 1930s caricatures of Jews is pointed out, masses of Star Trek fans shriek to the show's defence claiming it's all a coincidence in much the same way Star Wars fans try to deny Jar-Jar Binks is - unintentionally or otherwise - a CGI black and white minstrel.)


"Rules of Acquisition" takes on one of the more unpalatable aspects of Ferengi culture: its treatment of women. Ferengi culture dictates that women can not own property, go out in public or even wear clothes. It is an aggressively misogynist society that actually strains my sympathy for them quite a bit. Quark's new waiter Pel is a women dressed as a man, and in the best Shakespearean tradition a romance stirs between her and Quark without him realising she's a woman. This is played with heart and humour and Armin Shimerman - an accomplished Shakespearean performer - knows exactly the right tone to hit. Guest star Helene Udy matches his performance wonderfully. Wallace Shawn (he of The Princess Bride) returns as Grand Nagus Zek, and gives another broadly comedic perfomance.

Underneath the comedic storyline and performances, one of the most significant moments of Deep Space Nine slips by almost undetected. Zek's mission for Quark and Pel, ostensibly about trading in wine, is actually to make contact with the mysterious federation of worlds governing the Gamma Quadrant. Known as the Dominion, their influence becomes stunningly apparent in Season 2's finale, "The Jem'Hadar".

How much you enjoy "Rules of Acquisition" likely depends on whether or not you like Deep Space Nine's Ferengi episodes. I personally like them a great deal, and think this one's great at what it does. So that makes six out of seven so far for Deep Space Nine's second season, or 86%.
Posted by Grant at 9:45 AM