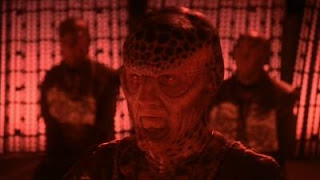 A deadly accident in one of Babylon 5's docking bays leads the station's overworked maintenance and docking crews to go on strike, putting pressure onto an already overloaded station. Meanwhile G'Kar is on the hunt for an Eth plant, and the only person on the station who has one is his arch-enemy Londo Mollari.

You read that correctly: a major plot thread of this episode is G'Kar and Mollari arguing over a flower. Actually they kept referring to needing an "Eth plant", which I spent the first 15 minutes mishearing as "eggplant", which was even more ridiculous.


The core of the episode, however, is about a dock workers strike, which brings to mind heady memories of when George Lucas used a trade dispute as the central premise of Star Wars Episode I. On the one hand it's nice to see a science fiction series actually deal with solid bricks-and-mortar issues like pay disputes and occupational health and safety. On the other hand, there's a reason the other SF programmes don't bother to focus on this.

John Snyder is positively dreadful as Zento, the negotiator sent by the Earth Senate to resolve the dock workers strike. He's like a cartoon villain, with a performance exaggerated all out of proportion. The remaining guest stars are serviceable, but don't really get a chance to do much else due to a simplistic script.

"By Any Means Necessary" was written by Kathryn M. Drennan, who had previously worked with Carl Sagan and Star Trek: The Next Generation producer Michael Piller. She was also at the time J. Michael Straczynski's wife, and to avoid any accusations of favouritism her storyline and script were submitted and developed through story editor Larry DiTillio instead. You can actually tell the difference: I am by no means a keen fan of Straczynski's writing, but he is very capable of individual lines and scenes that transcend the episodes around them. This isn't the case here. The episode is a bundle of cliches and stereotypes, with broadly drawn characters lacking depth beyond the simplest motivations. The script is full of tedious science fictional similies such as "she's as crazy as a neutron", or "this is as serious as a tear in a spacesuit". It's still watchable, but it's uninteresting. It lacks flair.

One piece of credit I will grant the episode is that for the first time I can think of in SF television one character tells another over an intercom "you've got to come see this", and instead of walking all the way to the control deck, or engineering, or wherever, the other character actually asks "why, what is it?" and actually gets told.

It's a pity the rest of the episode didn't interest me as much. We're 12 episodes in, and I've still only fully liked four of the episodes. The rolling score is now 33% - one good episode in three.
Posted by Grant at 7:28 PM