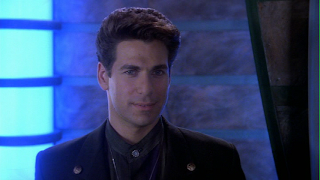 Each season of Babylon 5 has its own title, sort of like The Lord of the Rings is divided into The Fellowship of the Ring, The Two Towers and The Return of the King. I didn't know this when the series originally aired, but they wound up using the season titles on the DVD sets. Season 1 is officially titled Signs and Portents, which is by no coincidence also the title of the season's 13th episode.

The raiders subplot that has been troubled the station since the season began reaches a crisis point. Sinclair confides in Garibaldi about his experience during the Battle of the Line. A mysterious smiling stranger arrives on the station, with only one question for each of the ambassadors: 'What do you want?'

I'm usually used to kicking Straczynski's writing like nobody's business, but that isn't something I can do here. "Signs and Portents" is an outstanding piece of writing. Over the previous 12 episodes there's been a surfeit of humorous, rather silly scenes. There's one in this episode featuring G'Kar and Londo arguing pointlessly while waiting for an elevator. In the context of this sort of writing, it doesn't seem out of place for a weird smiling guy to start visiting each ambassador in turn repeatedly asking 'What do you want?' until they kick him out of their quarters or otherwise dismiss him. It starts off vaguely ridiculous. Then, quite unexpectedly, it gets rather frightening.

It's done in a subtle way, because at no point does this character - we'll later learn his name is Morden - lose his cool, change his tone, or do anything other than politely and cheerfully ask people what they want. G'Kar dismisses him. Then Delenn is actively terrified of him, and a shining triangular symbol appears on her forehead which she struggles to hide - it last appeared during Sinclair's flashback in "And the Sky Full of Stars". Morden meets the Vorlon ambassador Kosh in a corridor and is told 'They are not for you.' before the scene abruptly cuts away. Later we learn Kosh required materials to repair his damaged encounter suit. It's the growing reactions to Morden that make him appear so threatening, because his demeanour - as I've noted - never changes at all.

In the end it is Londo Mollari who tells Morden what he needs to hear: a return to glory for the Centauri Republic, something that Morden's mysterious backers already begin to provide to Londo by the episode's conclusion. Whoever they are, they're not wasting their time. 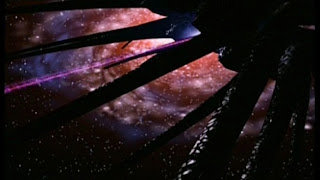 It's clever writing, because all Morden and his associates do in this episode is be polite, have a few conversations, help out one of the regular cast and eliminate the raider threat against the station once and for all. It's all essentially 'good guy' stuff, yet we walk away thinking of them as villains. Why? It's almost certainly because two other regular characters - Delenn and Kosh - are actively opposed to them. The Minbari are hardly trustworthy, however, and this episode alone throws a lot of suspicion onto them. The Vorlons are positively opaque - we can't even guess at their motives. The other factor at work is basically the viewers' common sense: nobody gets something for nothing. The bizarrely abrupt way in which Morden's group destroy a raider carrier, recover a lost Centauri treasure and return it to Londo is innately suspicious. It is, as the saying goes, too good to be true. Then there's the alien starship, black, oily, spiny, unlike any other seen in the series. It doesn't just destroy the raider carrier - it massacres it, slicing it to pieces in the space of seconds. Morden's guys are frighteningly powerful.

And here's where I'm a bit torn because while I've generally disliked the superficial tone of Babylon 5's early episodes, without that tone being set up "Signs and Portents" wouldn't be one tenth as effective as it is. It's got the best title of an episode so far, because signs and portents are exactly what this episode provides. Lots of hints. Lots of questions. A prophecy of the station's impending destruction. And a shadow beginning to loom worringly over the narrative (pun intended).