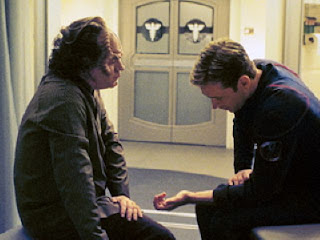 Trip spends a day on an alien starship, helping its crew to repair its warp drive. Shortly after he returns to the Enterprise, he discovers that he is unexpectedly - and inexplicably - pregnant. The race is on to relocate the alien vessel before Trip (somehow) gives birth to the galaxy's first human-alien hybrid.

The first half of "Unexpected" is outstanding. The Enterprise's crew locate a cloaked alien starship coasting in their wake, and after making first contact agree to aid them in repairing their vessel. Trip volunteers to be the one to go across, a process that includes three hours in a decompression chamber each way. (That was a detail I adored - try as I might I can't think of any other science fiction text that's considered air pressure as a factor in alien species meeting one another.) Once there, he treats us to a gentle, nicely-paced story of first contact and experiencing new cultures. By the time he returned back to the Enteprise, the alien drive repaired, I couldn't help but feel disappointed that the whole episode couldn't have been so refreshingly action-free and relaxed.

Unfortunately the main plot subsequently kicks in, and the Enterprise eventually finds the alien ship cloaked once again, this time leeching its needed power off a Klingon battle cruiser. There's no need for the Klingons to turn up in this episode, and it jars quite badly when they do. Only three episodes earlier the Klingons were a strange, unfamiliar species - now they're just the Klingons. Once again the series takes a valuable opportunity and abandons it in favour of the overly-familiar. 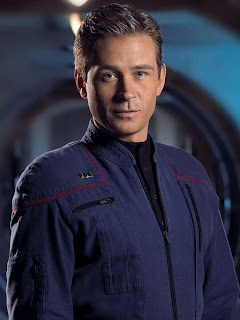 Trip's pregnancy is played primarily for laughs, and it skirts a dangerous line between being genuinely funny and being filled with those appalling caricatures of female pregnancy that we got in things like Ivan Reitman's film Junior (that one with Schwarzenegger having a baby). For the most part it works, but it was touch-and-go on more than a few occasions.

One thing that really didn't work for me is the episode's resolution: Trip essentially has the foetus surgically removed on the alien ship, where it can then be born with its own kind. The casual way in which Trip abandons an unborn child that is 50% his own doesn't feel right. I'm sure there would be an overwhelming sense of relief on his part that he was no longer pregnant, but I would have liked to have seen some indication that he was sad to let it go, or planned to see it one day. Or something. Anything. As it is the episode writes the baby out as a comical inconvenience, and that doesn't sit right with me at all.

Now that we're four episodes in, a few things are becoming clear. There has been an obvious effort with Enterprise to replicate the classic Kirk-Spock-Bones dynamic with Archer, T'Pol and Trip. For the most part it works, and certainly with each episode I'm growing more attached to the trio, but it does seem to come at the expense of the rest of the cast. Phlox remains engaging and enjoyable, but Hoshi feels tedious and Reed and Montgomery are so completely forgettable that I had to use the Internet to look up their names.

While many aspects of this episode worked, and I was in broad terms quite entertained, the drawbacks were just a little too much for me to overlook. This one's close, but I'd be unfair if I recommended it. So we're sitting on two good episodes out of four, or 50% once again.
Posted by Grant at 10:13 PM