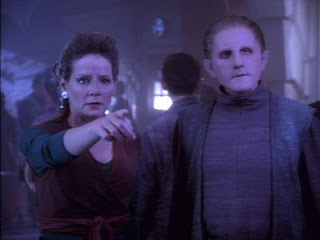 When Quark is badly wounded in his own bar, Odo's investigation leads him back to his very first murder case - conducted during the Cardassian occupation of Bajor and his very first meeting with Kira Nerys.

"Necessary Evil" is an outstanding hour of American television, combining the standard tropes of the Star Trek franchise with elements of film noir, extensive flashbacks and genuinely well-written and performed drama. It showcases two of the best elements Deep Space Nine has at its disposal: firstly, the most consistently talented regular cast that Star Trek ever had, and secondly, the ability to extend stories outside of Starfleet and into the lives of those outside their utopian world view.

The over-arching murder mystery is a framework rather than a narrative in itself: it allows the viewer to be transported back five years to the height of the Cardassian occupation of Bajor. The backstory of Deep Space Nine has always struck me as a deeply provocative one. Sometimes it feels like the series is using the occupation to comment on occupied Palestine, but other times - such as here - it feels like its closely referencing Nazi Germany. The flashback allows us to discover how Odo ultimately became the irascible station security chief he is, as well as provide insights into just how awful the situation was before the Cardassians withdrew.

The performances of the series regulars (and regular guest stars) are exceptional. Rene Auberjonois does a marvellous job portraying two very different Odos, particularly the awkward and inexperienced investigator of the past. Nana Visitor plays a younger Kira with similarly impressive skill. It allows us to see how much both characters have grown - and how close they have become - while never preventing us from feeling that we are watching the same two characters throughout.

Max Grodenchik gets some wonderful opportunities for comedy as Quark's brother Rom - simultaneously a lot smarter than he looks in some areas, but exactly as stupid as he looks in others. He provides the episode with some much-needed laughs. I've always felt Rom was a sorely underrated character, and the proof of that is highly evident here. 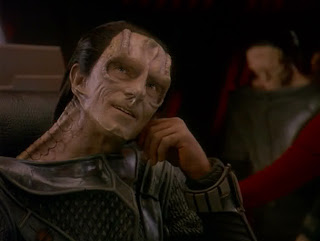 Also worth noting is the late Marc Alaimo as Gul Dukat, the Cardassian commander of Deep Space Nine (or Terok Nor, as it was called under his command). He is a rivetting character. He's thoroughly vile, yet not quite as vile as his fellow Cardassians, and with a very slight edge of fairness to him. Alaimo plays him with a lot of charisma, but never loses touch with the underlying cruelty. There's something very intriguing about the fact that it was the show's key villain who first noticed Odo's potential, and set the shapeshifter on the course that dictated the rest of his life.

"Necessary Evil" is, in my opinion, the best episode of Season 2 so far. That makes the running tally seven good episodes out of eight, or 88%. This really was one of the best SF TV series ever made.
Posted by Grant at 9:06 AM