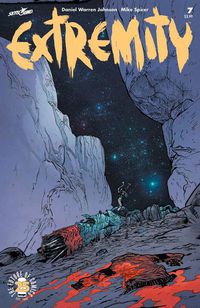 In the aftermath of the battle between the Paznina and Roto clans, Thea and Rollo find themselves lost in the so-called "Ancient Dark", where they find a community of humans in the last place they expected to find them.

Daniel Warren Johnson's post-apocalyptic Extremity returns for its second and final story arc, bringing with it strong and well-developed characters and absolutely stunning art and design. This is one of the best new comics of 2017 - if not the best - and it has lost none of its impact or style during its brief hiatus. Johnson picks up the story threads across the entire cast and points them all towards what I fear will be a devastating climax in the issues to come.

The detail of the artwork is incredible, particularly in one particularly impactful double-splash page where Thea gets her first glimpse of the mysterious "Essene". This is a wonderful comic book, and knowing that it has been planned as a limited 12-issue series from the outset just makes each issue feel a little more precious. (5/5)

"The First Ally" comes to a conclusion as Batman and Alfred take on Alfred's former mentor. Visually it's marvellous thanks to typically strong work by artist Rafael Albuquerque and colourist Jordie Bellaire. Storywise it feels a little weaker. Earlier issues seemed to indicate something rather groundbreaking and shocking, but when it all wraps up it's honest just another Batman comic. There is some lovely work done between Bruce and Alfred, which is never a bad thing. The back-up strip - which also concludes here - is solid and enjoyable. (3/5)

Another conclusion, with "The War of Jokes and Riddles" wrapping up with Batman, the Joker and the Riddler together in a room in the past, and Bruce waiting for Selina's answer in the present. Beautiful art and composition, smart and effective dialogue, and yet... This whole story arc has felt weirdly flat. Too much has been told and not shown. The rhythm of the piece has felt weirdly off. The much-foreshadowed climax, in which we discover what Batman did during the war that made him so ashamed, feels a tiny bit underwhelming. It's still excellent, but you can see the masterpiece hiding behind the comic we actually got. It's that frustrating case of being so close. (4/5)

His mission to create a Sith lightsaber complete, Vader is ordered to the Jedi Temple on Coruscant to eliminate an intruder. While the art here is good, the story is simply rather dull: it tells the first encounter between Darth Vader and the Inquisitors seen in the Star Wars Rebels television cartoon. There's no real nuance here, or an interesting plot; it's just what it says on the tin and is fairly boring as a result. I have been going hot and cold on this second volume of Darth Vader. Right now it's definitely swung towards the cold end. (2/5)

Susan and Esther fret over their conflict with Daisy, who has moved out over their dislike of her intolerable German girlfriend. They look to McGraw for help, but he's too busy dodging the angry Spanish brothers of his ex. As always, this is a comedy soap opera among university undergraduates that manages to consistently be funny, charming and in a slightly sneaky fashion genuinely emotionally effective. Part of me desperately wants to see this comic get picked up as an animated series; it would be perfect. (4/5)

"Gotham Resistance" ends here, as the disparate team of Nightwing, Robin, Green Arrow, Harley Quinn and Killer Croc fight their way to the centre of the maze Gotham has mysteriously come in order to take on the "Batman Who Laughs". I have mentioned many times before my general distaste for event tie-ins - this all ties into Dark Nights: Metal - but was willing to give "Gotham Resistance" a chance. Sadly its conclusion is no conclusion at all; to find out what happens next you have to buy Metal #3. That sort of thing is a dealbreaker for me. Some interesting ideas, nice rich colour artwork by Juan Ferreyra, but an ending that throws most of it away. (2/5)

Hip-hop duo Rae Sremmurd head for New Orleans, never suspecting they are about to collide with Shadowman and the unearthly powers of the Deadside. When I heard about this new one-shot from Valiant, I assumed that Rae Sremmurd was just a fictional creation for the book. It turns out they're a very real hip-hop group, cross-promoting themselves through a supernatural comic book adventure. It's a fairly simple story, one that draws its inspiration from the urban myth of Robert Johnson selling his soul to the devil, but it is wonderfully illustrated by Rahal in a painterly style and doesn't outstay its welcome. Pardon the pun, but it's a hell of a lot of fun. (4/5)

Unsure over whether to stay in school, stay being Spider-Man, or simply run away for a different life, Miles has fled to Tokyo - and immediately been forced by an unknown figure to take down an Inhuman-run crime syndicate. It's a nice issue that balances action and drama, although the surprise reveal at the end had me scratching my head rather than gasping with shock - it's really not a logical or sensible link between titles to me. Nico Leon's art continues to impress, as do Brian Michael Bendis' iconic two-page layouts. It's a lot of fun. (4/5)

Superman takes on Deathstroke when the latter - heavily armed with anti-Superman defences - takes up a contract to kill Lois Lane. This isn't exceptional, but it's certainly a lot of fun. Tyler Kirkham's artwork delivers plenty of action, while James Bonny's script has a lot of solid ideas about how a Deathstroke-vs-Superman fight would actually be feasible. This is not a groundbreaking comic, but for fans of Deathstroke it's a bunch of fun and for fans of action-based superhero books it will be right up your alley. (3/5)

The second half of "The Body in the Library" proves more effective than the first, as Usagi and Ishida's murder investigation takes on a new direction. Stan Sakai's exceptional storytelling skills really bring this storyline home, with not only a strong plot but great little character moments for the entire cast - especially the thieves Kitsune (basically Catwoman to Usagi's Batman) and Kiyoko. A one-page serialised "Chibi-Usagi" strip is the icing on the cake. (5/5)
Posted by Grant at 5:03 PM