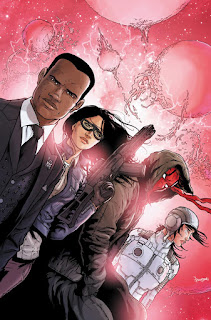 Warren Ellis and Jon Davis-Hunt are back with the second six-issue arc of The Wild Storm. It's wonderful to have it back.

This series takes the various characters of Jim Lee's Wildstorm Universe, long since subsumed by DC Comics, and re-works and re-imagines them into a contemporary science fiction story. I'm not sure if 'post-superhero' is a term, but it should be so that I can use it to describe this book. It has all the hallmarks of a superhero title, but instead it's a story of billionaire tech industry CEOs, black ops crews, and rival secret services ruling both Earth and the space around it.

Davis-Hunt's artwork is clean and expressive, and gently coloured by Steve Buccellato. Ellis' script is smart, well-plotted and does a remarkably great job of bringing new readers (and readers like me with bad memories) an excellent summary of the first six issues to brings everything back up to speed. This is a long game story that Ellis is telling; DC announced from the outset that it's a 24 issue story. So far it's pretty much brilliant, and a must-read for fans of Ellis and that blurry space between costumed heroes and near-future SF. (4/5)

An outbreak of demonic possessions in New York sees Doctor Strange stretched to his limits - and it all seems to have something to do with an old adventure that he has somehow forgotten. Flashbacks aplenty here, illustrated by an artist jam including the legendary Kevin Nowlan, and a really successful capturing by writer John Barber of the old Doctor Strange comics of the 1970s. After a pretty tedious Secret Empire tie-in, this issue is a tad overpriced but also a refreshing change with a back-to-basic approach that it badly needs. (4/5)

Green Arrow has travelled across America and into space in a quest to strike back against the Ninth Circle organisation that has destroyed his life and secretly taken over Seattle. Aided by a string of DC superheroes, his climactic fight brings all of them back to help out. It's essentially an issue of Justice League by stealth, and answers why in the post-Rebirth DC Universe Oliver Queen doesn't hang out with the League. It's solid and entertaining stuff. It's not a classic, but it's very entertaining. (3/5)

There is a really unpleasant two pages of King Minos in a scene of just loathsome sexual abuse. It feels like it over-steps the mark: I did not need to have his character spelled out so graphically. I mention this not just to caution readers but also to criticise it: despite the issue's merits, that is what I think of when I come to write down a few sentences about it. Elsewhere this miniseries goes in an unexpected direction, and actually changes genres. That I did not expect. A mixed bag this one. (3/5)

A four-title Dark Nights: Metal spin-off has me reading Teen Titans, Suicide Squad and Nightwing simply because I also read Green Arrow. This is the sort of thing that drives me crazy, yet I figured I'd go with it because I like a lot of the characters featured. The first part in Teen Titans was okay. This second part, in Nightwing, is nowhere near as satisfying. It feels overloaded and messy. It references old storylines a bit too much. Pelletier and Hennessy's artwork is good, but Tim Seeley's script is just a bit too busy to have the desired impact. (2/5)

Livewire and her team of poorly powered psiots gather together to draw Rex-O out and defeat it once and for all. I absolutely adore Valiant's approach of publishing ongoing waves of four-part miniseries, in which they can pick and choose from their character roster based on the needs of the stories. This one has been an absolute gem: smart, beautifully illustrated and designed, based around tremendously likeable characters, and just really enormously entertaining. I had an absolute blast. If you're interested in sampling Valiant's stuff, this would be a very clever place to begin. (5/5)

The attention of Star Trek fans may currently be distracted by the premiere of Star Trek: Discovery on CBS All Access and Netflix, but IDW's ongoing follow-up to Star Trek Beyond keeps on trucking. By coincidence or design, this issue features a climactic moment of the Federation-Klingon War that series is addressing - albeit the version that occurs in this "Kelvin timeline" - before spinning off into a story of a missing smuggler and the legacy of the famous Captain Garth. Megan Levens' artwork is a little cartoony, but after a few pages it was easy enough to settle in. (3/5)
Posted by Grant at 9:03 AM