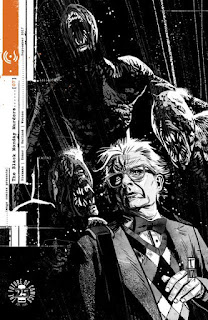 At an unexpected intersection between global finance and supernatural horror sits Jonathan Hickman and Tomm Coker's The Black Monday Murders. The series tells a story of rival, magically powerful houses controlling the world through its financial markets and a homicide detective trying to find out what they are doing. Hickman does this not just through the comic narrative but also through various documents - e-mails, press releases, newspaper clippings - interspersed between scenes of the main storyline. It's beautifully illustrated by Tomm Coker and hugely atmospheric, but it's also a stunning work of graphic design and layout.

It also gets dark - sometimes very dark - and this seventh issue is not only the darkest to date it's also certainly the very best. The story takes what feels like a significant step forwards here, as Detective Theodore Dumas and academic Tyler Gaddis buy their way into a meeting with the god Mammon - and the price is terrifyingly steep. It's a meeting that finally shifts the book from dark and creepy urban fantasy into full-blown horror, and the book is all the better for it.

Hickman is an uncompromising writer, and his creator-owned work rarely wastes time handing the story to his audience on a plate, but if you like intelligent and complex genre works in a comic book format he's genuinely tough to beat. The Black Monday Murders is incredible. (5/5)

Under the cut: reviews of Generations: The Spiders, The Infinite Loop, and Rat Queens.

Another of Marvel's time-travelling one-shots, in this case throwing Miles Morales back for an encounter with a young Peter Parker near the beginning of his Spider-Man career. This one has less action than the previous week's Ms Marvel team-up, but spends a lot more time on character and one-to-one interactions between the two leads. It's a nice read, with a deliberately old-fashioned illustration style by Ramon Perez, but at the same time it definitely is not a must-read. Fans of the characters will enjoy it, anyone else can pass it by. (3/5)

The Infinite Loop: Nothing But the Truth #1

IDW's queer time-travel drama returns for a second miniseries, which is a most welcome thing. The book is based on the idea that time-travel creates 'anomalies', glitches in time and space that must be destroyed to keep history stable. Occasionally - as happened in the original Infinite Loop - these anomalies take on human form, which complicates things terribly. Now that killing these human anomalies is illegal, they crowd refugee camps with no apparent hope of escape. Nothing But the Truth picks up some time later: protagonists Teddy and Ano (an anomaly) are no longer together, and after an action-packed start the story jumps back to show what happened. It's always a great narrative hook, and works very well here. It's great to have this series back for another few issues. (4/5)

Supporting character Orc Dave gets his own one-shot, fleshing out his characters and revealing his past. It is a beautifully composed and illustrated issue, one that eschews the traditional Rat Queens comedy in favour of a genuinely heartfelt fantasy about Dave and his disapproving father. The fantasy elements are inventive and effective and the character work is touching. That a one-shot like this can still fit in so well with the series overall is a huge credit to writer Kurtis J. Weibe, as well as guest artist Max Dunbar. It's just a wonderful read. (5/5)
Posted by Grant at 9:10 PM