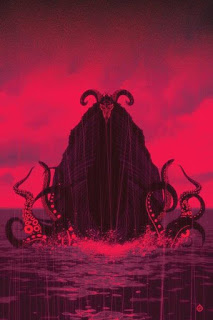 This new book from Aftershock simply feels dull. The concept works but the execution is sloppy. Bunn does not - in this issue at any rate - find an interesting enough story to build up his hook. There's some moping, and argumentative monsters, but no real indication on precisely where the story is supposed to go or why the readers should care. Juan Doe's artwork focuses a little too much on close-ups and head shots, without giving anything a particularly interesting background or sense of action. Then again, what sort of backgrounds can there be? The entire issue takes place on a ship in a storm.

A more interesting take might have focused on Shrae's journey to become the master of this 'dark ark'. Instead the most interesting parts of his story appear to have already happened.

Under the cut: reviews of Cloudia & Rex, Generations: The Marvels, Invader Zim, and Superman.

Stuck in a bubble in time, Cloudia and Rex's mother discovers she has a power of her own - and the potential to save her daughters from the supernatural forces bent on destroying the gods trapped in Cloudia's phone. This has been an unexpectedly short miniseries (3 issues), but Farinas and Freitas manage to pull it all together in a succinct and emotional climax that also provides for plenty of character development. I have loved Daniel Irizarri's bold art and colours, which have made this series distinctive and attractive to read. Hopefully the team will collaborate on another series soon. (4/5)

A time vortex or something, which goes essentially unexplained in this extra-length one-shot, throws Kamala Khan back in time to a period when fellow superhero Carol Danvers was Ms Marvel instead. Misadventure sees Kamala then thrust into Carol's day workplace as a magazine intern, while she and Carol also fight an alien invader in their respective Ms Marvel guises. This is pure, joyful entertainment, playing with Kamala's fish-out-of-water situation and getting as much mileage as possible out of the two women interacting - one fully in the know, the other completely oblivious to what the future will bring. The issue has a brilliant loose 1970s setting that of course does not remotely work if one starts obsessing over the continuity issues, but taken as a one-off it's brilliant. (5/5)

When Gir is infected with a computer virus, Zim heads into a virtual representation of Gir's mind to repair him. This is middle-of-the-road Invader Zim: amiable, funny in fits and starts, and boldly illustrated and coloured. I don't think this is ever going to be a must-read comic book, but it scratches a particular itch and does occasionally throw out a really hilarious joke or clever concept. The recommendation for this book is pretty much always going to be the same: if you're sort of person who'd like an Invader Zim comic, you're probably going to enjoy this Invader Zim comic. (3/5)

This issue, in a nutshell: Lois Lane decides to try and score an interview with Deathstroke the Terminator. When it comes to big shared superhero universes, I am a big fan of the unexpected and unlikely guest appearance, and a Lane/Slade Wilson meeting fits that bill pretty much perfectly. Tyler Kirkham's artwork is intricately detailed as always, and James Bonny's script is inventive enough to make this a fairly enjoyable diversion. It's by no means a classic, but it's solid. (3/5)
Posted by Grant at 9:10 PM