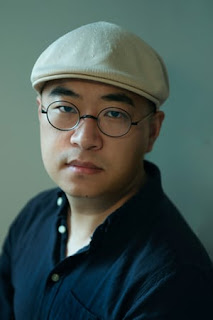 I first encountered Yang Yongliang's digital art works in an exhibit of contemporary Chinese art in Singapore. They grabbed my attention immediately, and have been stuck in my memory ever since. They're just enormously effective and captivating. I think they have a near-hypnotic effect.

Yang originally trained in traditional Chinese ink painting before formally studying visual communication in Shanghai. After a few years of experimentation in ink painting, short film-making and photography, he started working on his so-called 'phantom landscapes' in 2006. In his works he draws intricate Chinese landscapes in the popular 'shanshui' style of the Northern Song dynasty (960-1127 CE). Into them, however, he inserted modern buildings and technology, and tightly clustered fictional cities. Then he animates them.

The animation is always relatively tiny and subtle: a waterfall in the distance, lightning on the horizon, or flashing lights atop some faraway building. It achieves a staggering effect: a very old and traditional art form is rammed up against the contemporary world. It is a moving picture that simply begs you to lean in and spend minutes at a time examining and experiencing every tiny detail.

Yang continues to work in digital photography, painting and film-making, but it is deeply effective and absorbing moving paintings that stick in the mind. I have embedded a Youtube clip of one of them below; just imagine it painting-sized.

Email ThisBlogThis!Share to TwitterShare to FacebookShare to Pinterest
Labels: An Artist, art, China