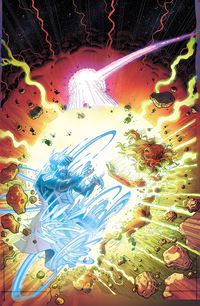 So Mr Oz, the mysterious hooded figure who has been trapping heroes and villains of various persuasions and monitoring Superman's ever move has revealed himself to be Jor-El of Krypton - Superman's presumed-dead father now living in hiding with a face full of kryptonite fragment.

Never judge a story before it's done. That said, DC and writer Dan Jurgens are doing their level best to make me judge this particular story as soon as possible. I really hate the idea. I cringe at the re-imagining of Jor-El as some kind of selfish villain intent to removing his son from the Earth and letting the planet destroy itself. It's not noble. It's not dignified. It flies in the face of everything we know of Jor-El from decades of comic book lore. I am still half-convinced that it's all a ruse, and a shock twist in a fortnight or two will unmask the real Mr Oz. Or perhaps I'm just hoping that's going to be the case.

Ryan Sook's artwork is strong and boldly coloured. Jurgen's script is solid enough, although its reliance on narrated flashbacks makes it all feel unnecessary static and uninvolved. After such a long build-up, I'm not so much feeling disappointed as angry. Please be a ruse... please be a ruse... (2/5)

Under the cut: reviews of Detective Comics, Hi-Fi Fight Club, The Power of the Dark Crystal, Rebels and X-O Manowar.

The Mr Oz saga spills out to Detective Comics as well, as he reveals himself to the presumed-dead but really imprisoned Tim Drake. That's almost an aside for the bulk of this issue, however, which restores Tim's origins and back story - a very welcome change - while introducing an unexpected but great new guest star. James Tynion's script is excellent and captures Tim well. One oddly posed splash page aside, Eddy Barrows and Eber Ferreira provide some great art. (4/5)

Chris is the latest employee of an indie record store, with no desire greater than to prove her knowledge of music and win the heart of co-worker Maggie. It's a bit of a surprise, then, for her to discover the entire store is a front for a team of urban vigilantes running around solving crime and beating up the perpetrators. This is a wonderful miniseries so far, one with likeable and warm characters and a pitch-perfect sense of mid-1990s nostalgia. The artwork is particularly sweet and expressive. (4/5)

The Power of the Dark Crystal #7

The Power of the Dark Crystal, which is based on the completed but unfilmed sequel screenplay, has done a generally good job of capturing the plot style and characters of the beloved 1982 original, but it is this issue that absolutely nails the emotional tone and pitch of the film. It doesn't just look like a Dark Crystal sequel, now it feels like one as well. Thurma and Kensho continue their race to reach the underground and save the fire world, and an elderly Jen follows in hot pursuit - only to gain a blunt perspective on his place in this new conflict. My big regret with this series now is that it's a comic and not a film - based on what I've read, this could actually have been a decent and respectful follow-up. (4/5)

Another one-shot set during the American Revolution: two orphans living on a farm go to George Washington with information on a fortune in sunken treasure. The striking thing about these stories is that Brian Wood bases them on historical events; as always, truth is stranger than fiction. Luca Casalanguida provides excellent artwork, as does Lauren Affe. A strong one-shot is always hard to write, since there is so little time in which to develop plot, character and tone. Wood is just superb at it.(4/5)

A new story arc kicks off here, for readers tempted to try this superb science fiction/fantasy epic out. Aric was a slave fighting somebody else's war, but now he rules instead. It's all very reminiscent of Conan the Barbarian or Marvel's famous Planet Hulk, but Matt Kindt writes it beautifully and Clayton Crain illustrates it in a remarkable and absolutely beautiful fashion. It all has an epic sense of scale and power to it, and the series continues to show incredibly restraint: despite the cover, Aric has not fully embraced his power suit since this new volume of X-O Manowar began. (4/5)
Posted by Grant at 11:43 AM