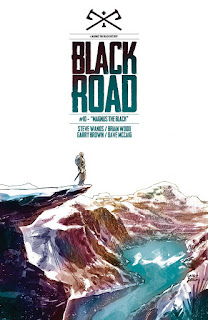 Black Road comes to its inevitable, fatal conclusion: this 10-issue series, heralded as a "Magnus the Black mystery", has been a bloody and bleak journey through an early medieval Scandinavia overrun and transformed by Christianity. It has been rich in tone and character, and this final issue is no exception.

This is essentially more epilogue than climax. The main battle has been fought, and all that is left here is basically tidying up the loose ends and providing a full explanation for where Magnus has come from and what has led him to this point. He is a great character, and I really hope the "Magnus the Black mystery" tagline means we will get a sequel series before too long.

Garry Brown and Dave McCaig's artwork has effectively pressed the barren, frozen environs of the story. It's a wonderful shift in style from what the same creative team were doing on The Massive a year or two back.

There are no huge surprises here, because Black Road is not really intended as a surprise story. It is simply a good story, told in a strong and measured fashion. It ends on pretty much a perfect note. (5/5)

Under the cut: a short end to the week with reviews of Hadrian's Wall and Star Trek: Waypoint.

There has been a sharp change in the tone of Hadrian's Wall as it races towards its climax. It began as a very dry and detached science fiction murder mystery, but in recent issues has evolved into a high stakes thriller pitting scientists on a spaceship against terrorists. While it's entertaining to read and still brilliantly illustrated, I think something special has been lost in the transition. I really preferred the cooler tone and pace of the earlier issues. One issue to go, so fingers crossed it does something really impressive to pull it all together. (3/5)

Another two short stories set in the Star Trek universe. The first is a neat little adventure for Dr Bashir on Deep Space Nine. The second, and easily the standout of the two, is an original series era story about an ensign sent to assist in an observation mission on a primitive planet. They both function rather like 2000 AD strips, with a brisk set-up and a surprising ending, however "Come Away, Child" packs a much greater emotional wallop that one would expect from so short a storyline. Simon Roy's distinctive artwork only makes it more memorable. (4/5)
Posted by Grant at 10:50 PM