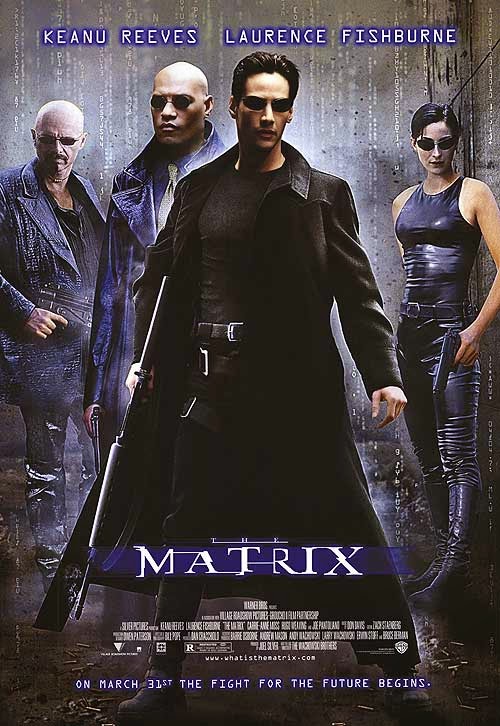 I remember back in 1999 everybody was growing increasingly hyped by George Lucas' Star Wars Episode I - so hyped, in fact, that most science fiction enthusiasts didn't even seem that aware of The Matrix until it was suddenly out in front of them in cinemas. It has an intriguing but deliberately cagey trailer, a brilliant electronic/rock soundtrack CD and a slow-growing buzz that suggested it was going to be the film to watch.

Post-1999, of course, and we're all very aware of just how disappointing Episode I was and just how overwhelmingly popular The Matrix was. It might not have been the biggest hit of its year (that was, rather hilariously, Star Wars Episode I) but it was the film that most pushed the zeitgeist. Everyone talked about The Matrix in 1999. Filmmakers copied it. Audiences warmed to new filming and effects techniques - it's difficult to imagine American audiences accepting Crouching Tiger Hidden Dragon so readily had they not been warmed up by The Matrix's wire-work kung-fu first. Warner Bros immediately commissioned two sequels to form a Matrix trilogy. In all the hype, the nostalgia (it's been 15 years, after all), and with the film's numerous visual iconic moments, it's actually quite difficult to take a step back and re-assess The Matrix on its own merits.

I figured I'd have a go.

To be completely honest my first reaction on this rewatch was just how comparatively cheap it all looked. Don't get me wrong: it looks great, and tells its story with a lot of visual style, but after the massive budgets and enormous use of computer-generated effects throughout the sequels I had actually forgotten how much of the original used actual actors on location. There's a slight scrappy edge to the film that I think makes it a lot more palatable than its successors. Even in the virtual environment, things feel real.

There's the rather elegant way the film takes fairly dry and in-depth philosophical issues and simplifies them down into a science fiction adventure. Sure nuance is lost, and yes it all boils down a little too simplistically, but this is an action flick at its heart. That it manages to be an action flick that references Jean Baudrillard is pretty phenomenal.

The Matrix does a remarkable job of gathering together a whole raft of cultural and textual influences and massaging them into a populist movie. Whether it's the Hong Kong-inspired kung fu, or the Ghost in the Shell visuals, or the plot elements lifted liberally from Grant Morrison's The Invisibles (and how), it all pulls up into an easily digestible whole - and that's a remarkable achievement. The Matrix helped drag a lot of cult phenomena into the mainstream, for good or bad. Personally I thought it was great.

The cast all remarkably solid. People tend to focus on the leads - Keanu Reeves doing close to career best, Laurence Fishburne, Carrie-Ann Moss - but for my money the two strongest performances come from Joe Pantoliano and Hugo Weaving. Pantoliano creates a likeable villain in the shape of Cypher (and his name is laugh-out-loud funny in its directness), while Weaving manages to play someone completely artificial and inhuman using nothing more than facial ticks and the cadence of his voice.

It's a beautifully constructed opening chapter. Had it been a one-off, self-contained film, it would have been perfectly satisfying. As the first part of a trilogy, it sets up the situation and the characters brilliantly. This is a film that earns its place as a movie classic. 1999 was one of the best years in motion pictures ever, and The Matrix more than manages to stand up among its year's highest achievers.
Posted by Grant at 8:56 AM