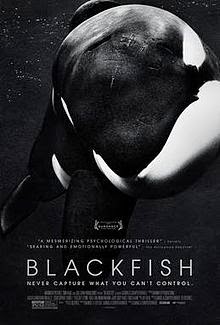 Gabriela Cowperthwaite's 2013 documentary Blackfish focuses on Tilikum, a captive killer whale that lives in a Seaworld theme park in the USA. He's male, large, intelligent and emotional. He has also killed three people. His story is a window into two realisations: firstly, that killer whales are truly extraordinary animals; secondly, that in capturing them and forcing them to perform for our amusement in theme parks and water attractions, we are torturing and killing them. This is not an easy documentary to sit through. I cried several times. I'm almost profoundly grateful for having seen it.

The events that led to this documentary being produced - the violent death of a Seaworld trainer - could easily inspire something quite sensationalistic and tacky. It is testament to Cowperthwaite's skills as a filmmaker that it never takes this route. It is oftentimes confronting, and in some scenes quite violent and brutal, but it never loses sight of what it is aimed to do, and it succeeds admirably in its goals. This is not simply a worthwhile and informative documentary - it is a necessary one.

It's a wonderfully even-handed documentary. It is narrated, almost in chorus, by a series of former Seaworld trainers who for one reason or another have left the company. It is primarily through them that we hear of Tilikum's life, his extraordinary history of abuse, and the factors that likely led to the death of trainer Dawn Brancheau. They are almost universally very sorry for their part in Seaworld's abuse of its animals. The film takes care not to demonise these people: they all made mistakes, and all participated in something terrible, but each of them comes across as older, much wiser and extraordinarily regretful for their youthful naivete.

Seaworld itself, however, is slowly and categorically demolished by this film. It begins subtly, with obvious evidence that the company acted more in the interests in its financial bottom line than in the welfare of its animal performers. Then, as the film goes on, it becomes clear the company cares more about money than the welfare of its trainers as well. By the film's conclusion it has formed a logical, well-researched and utterly savage indictment of Seaworld - and indeed in similar parks around the world where killer whales and dolphins are forced to perform in this manner. It's a horrible, loathsome situation.

This film reminded me a great deal of Project Nim, another film in which naivete and ignorance lead to the mistreatment of an innocent animal and a grave risk to human lives. That these things go on is terrible. That these filmmakers take the time and immense talent to tell us these stories should be commended, and we should all be watching them. It's painful, and oftentimes deeply upsetting, but we need to know this happens.
Posted by Grant at 9:45 AM