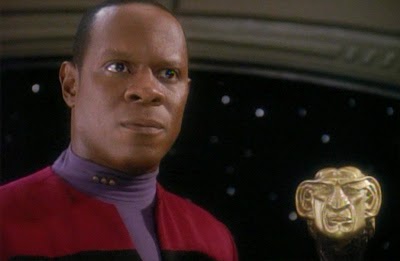 With Starfleet reeling from the destruction of the USS Odyssey, Commander Sisko is given command over the Defiant: a small over-powered battleship originally developed to fight the Borg. He takes the Deep Space Nine command crew with him on an urgent mission to the Gamma Quadrant to find the mysterious Founders of the Dominion, and to avert a galactic war before it can begin.

Season 3 kicks off with "The Search", a two-part story that introduces a lot of changes to Star Trek: Deep Space Nine. The obvious addition is the USS Defiant, basically giving the series a more iconic means of flying away from the station when certain episodes (like this one) require it. It's a nicely designed ship, sitting somewhere between the pre-existing Runabouts and a starship proper. It's also a ship built for war, which leads nearly into the second big change.

This isn't a series about peace and diplomacy any more. With the destruction of the Odyssey in "The Jem'Hadar" events have been set in motion that will dictate the remaining five years of the show. The Dominion and the Federation will sit the next year or two out in a tense cold war, before the series' final few seasons kick the heat up and then some. It's a distinction that finally enables Deep Space Nine to secure its own voice among its fellow Star Trek series: this isn't the neat, tied-up story that you'd get on Voyager or The Next Generation: Deep Space Nine is a series with messy choices and long-running consequences.

There are some new characters: Starfleet security officer Michael Eddington (Kenneth Marshall) is introduced, which of course leads Odo into another spin of petty mutterings and threats to resign. Like the briefly featured Lt Primmin in Season 1 Eddington was originally introduced to have an alternate character for Chief O'Brien, as Colm Meaney was expecting to be away shooting some film work and another character meet have been needed in his absence. In the end Eddington wasn't needed that much, and as we shall see the writers repurpose him beautifully.

Also introduced is T'Rul (Martha Hackett), a Romulan sub-commander enlisted to operate the Defiant's cloaking device. It was a bold idea to finally fit a Starfleet vessel with a cloak - Gene Roddenberry actively resisted the idea on the grounds that Starfleet 'doesn't sneak around' - but it's only used for this one episode and then it and T'Rul mysteriously vanish. On the one hand that's understandable, but on the other it feels like they could have told some interesting stories with a Romulan permanently assigned to DS9.

There are even a few minor changes for the show: a new meeting room for the leads to argue in, and a new design for Starfleet badges. A new design was developed for the then-upcoming feature film Star Trek: Generations, and passed down to Deep Space Nine. By virtue of its earlier release date, the TV series gets in there first.

The bulk of this episode plays out as a slow build-up - introducing the Defiant, the mission, re-introducing the cast for the new year - followed by a traditional sort of submarine thriller, with the Defiant sneaking around (Roddenberry must have been rolling in his grave) beneath the noses of Jem'Hadar patrols. By the episode's end the Defiant is going down in flames, O'Brien and Dax have been kidnapped, and Odo and Kira have escaped to an isolated planet in some distant nebula. Standing on a beach by a weird glowing brown ocean, they're stunned to see a community of shape-shifters climb out of the goo and approach them: after two years of searching, Odo has finally found his own people. That's a hell of a good cliffhanger.

This is a surprisingly decent episode given how much of it is really just set-up. There are a few hiccups: Sisko is bizarrely racist towards Quark, which is a standard problem with Star Trek. For all their claims of peace and exploration and interacting with other cultures, the Federation really are intolerably bigoted towards the Ferengi. Apart from that, however, the episode is pretty damned fantastic. It's a great beginning for the third season.
Posted by Grant at 10:28 PM