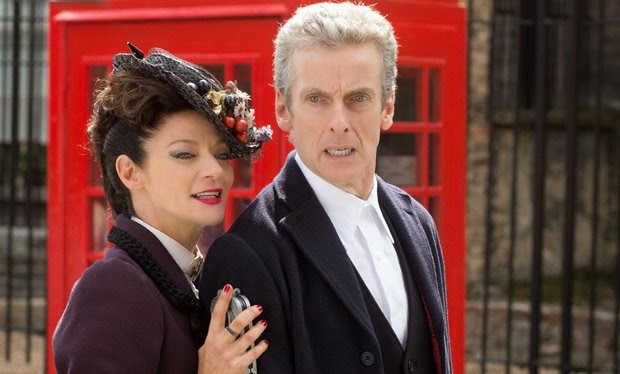 Throughout Season 8 we've had glimpses of the mysterious "Missy" (Michelle Gomez), self-proclaimed "Guardian of the Nethersphere", as she's picked up murder victims from around the Doctor's life and transporting them to some kind of virtual afterlife. Now the Doctor and Clara's paths finally cross with her, under the most tragic of circumstances - and with some unexpected revelations.

It's season finale time, and this year we're getting a two-part serial with a mid-story cliffhanger and everything. I love cliffhangers: they always seemed to me to be an integral part of Doctor Who, and I was sad when the new series focused on self-contained episodes rather than serials because it meant that for these past 10 years we've seen so few of them. This episode features the first proper cliffhanger and proper two-parter since May 2011. It's overdue. It's very welcome and, thankfully, it takes the welcome and provides an absolutely stunning episode in return.

There are spoilers under the cut: and they're bigger spoilers than usual. If you haven't seen "Dark Water" yet, I strongly recommend you go watch it before reading further.

We've spent much of Season 8 developing the relationship between Clara and fellow teacher Danny Pink. The last few weeks have seen their romance bogged down in a slightly tedious case of her lying to both him and the Doctor about her continued travels through time and space. Now they seem to be finally starting on the right track when Danny steps in front of a car and is killed. It is a shocking and blunt way to begin a Doctor Who episode: not just unexpected and tragic, but decidedly banal and everyday. You half expect the theme to a contemporary drama to kick in, like Casualty or EastEnders. Clara even mentions its banality itself. It's a very stark and abrupt beginning to an episode that immediately puts the viewer off-balance, and that sense of things going wrong continues throughout the episode.

Clara doesn't even ask the Doctor to change history and bring Danny back: she actively kidnaps him and threatens to trap him outside his TARDIS inside an active volcano. Her desperation is palpable. His emotive reactions are the best work Capaldi's done all year. Scratch that: it's the best scene in the series for either actor. It's jaw-droppingly confrontational, and successfully builds on the Doctor and Clara's relationship in the most logical of ways. It would be inaccurate to describe Capaldi's 12th Doctor as uncaring. The truth is he's simply caring when it matters. His promise to take Clara to whatever afterlife actually exists to find Danny is bold, wonderfully heartfelt and wonderfully bonkers. We've seen a lot of things in Doctor Who, but we've never been to heaven.

Of course it's not heaven, it's much more insidious than that. The full details remain unclear but I love the plan: take those people at the point of their death, upload their personalities in a mainframe and strip them of emotions, encase their damaged bodies in cybernetic shells and voila: instant Cyberman army. The Cybermen are a childhood favourite. They're probably my favourite Doctor Who monster. They're great. Their big reveal here is fantastic. There's a moment when a pair of doors close behind our characters, and it suddenly becomes apparent that the logo of the mysterioius W3 funerary company is a Cyberman eye, that actually made me laugh out loud.

The whole episode is very cleverly written by Steven Moffat, and seems filled with interesting and bold ideas. It's that magical thing: a ridiculously bold and daring script that actually pulls it off. Rachel Talalay (Tank Girl) directs it all very well too: it's visually great and yet directed with a wonderful sense of clarity. Hopefully she'll be back to direct next year.

Finally, of course, there's Missy. I had her pegged as some sort of mentally deranged future version of Clara. Instead Steven Moffat has gone for what may seem as the obvious choice - she's the regenerated and re-gendered Master (now the Mistress) - but also the braver choice. The looming possibility of a female Doctor has been growing on the horizon for about five years now. With one creative choice Moffat has as good as made it an inevitability. The idea of Time Lords swapping sex was mentioned offhand in Neil Gaiman's "The Doctor's Wife", but it's fully-fledged here. There are people who are going to hate the idea of the Mistress. While I'm not one hundred per cent onboard with the character as written (a Master who snogs the Doctor when she's a woman yet never tried when he was a man seems tediously hetero-normative) there are outstanding possibilities here, and Michelle Gomez plays the character brilliantly. Here's hoping she sticks around next season so those possibilities can be properly played out.

And the possibilities don't merely extend to the character herself. When we last saw the Master he (played by John Simm) was dragged back into the destruction of Gallifrey in a life-or-death battle with Rassilon. Since then we know the entire planet Gallifrey is lost somewhere outside of time, frozen in place. If the Master has somehow escaped, then in theory that means the Doctor can get back in. Gallifrey might be found sooner than we thought.

Next week sees the season finale hit: we've got the Mistress to defeat, a Cyberman invasion to stop, Clara and Danny to reunite happily ever after and a Doctor who needs to calm down. I have a sneaking suspicion that one of those things is not going to happen.

So apart from one tedious snog (damn you Steven Moffat for making me write "hetero-normative" into a Doctor Who review), this episode struck me as damn close to flawless. It's my favourite episode of the season to date, and pushes the quality ratio back up to 73%. Here's hoping they make the second half as good as the first.
Posted by Grant at 9:28 PM