Doctor Who: "Death in Heaven" 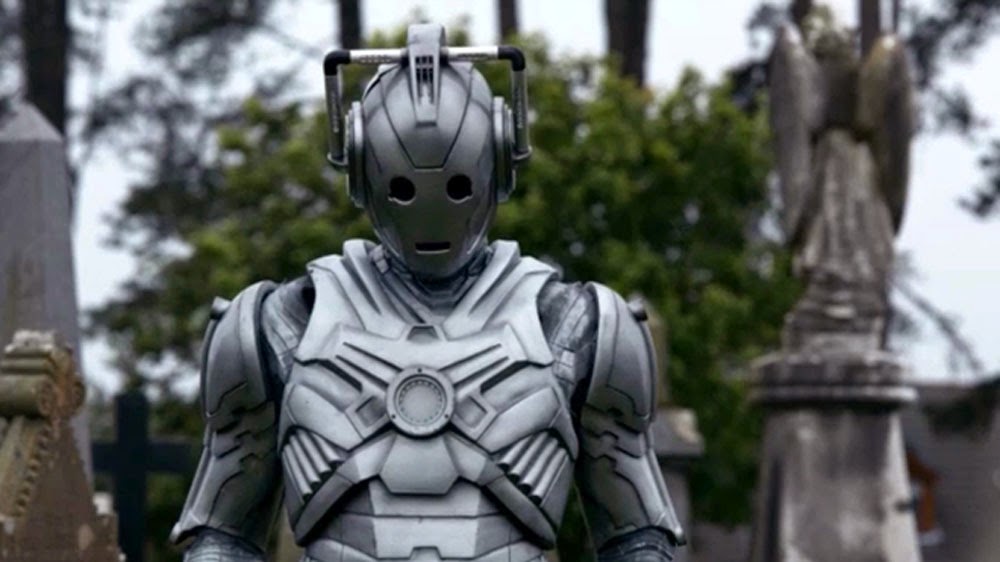 Peter Capaldi's first season as the Doctor comes to a rousing conclusion - or, at least, producer Steven Moffat and his production team hope it does. In truth, "Death in Heaven" is a staggeringly uneven affair. Every element or scene that works well is matched by one that doesn't and, like most season finales for the series, leaves the viewer in a wreckage of overwrought set pieces and irritatingly unanswered questions. I swear there's still a great series in Doctor Who, but episodes like this make it rather hard to make that claim to non-fans without looking delusional.

The episode actually begins very promisingly, with the Doctor and the Master ambushed by UNIT, drugged and taken aboard an executive airliner. There the Master is chained up in the cargo bay while the Doctor is appointed President of the planet Earth. That's a bit of a silly twist, really, but nothing worse that the silliness Russell T Davies used to throw at the series every finale. This one's not just silly though, it's also fairly redundant; after the Doctor's new position is made clear, it's not actually used or has any effect on the plot bar one well-placed sentence the Doctor says to the Master.

Meanwhile Clara is trapped inside the W3 Corporation, attempting to fool three Cybermen that she's actually the Doctor in disguise. It's a funny gambit, made even funnier by the episode's opening credits, but like the Doctor's Presidency it's abandoned as soon as it begins.

The middle of the episode is it's best part. Michelle Gomez is a fantastic Master, and Moffat gives her a script that emphasises her cruelty and her playful nature. Her murder of Osgood (Ingrid Oliver), just minutes after Osgood got foreshadowed as the next companion, is about as brutal a thing the series has thrown at the viewers since it came back in 2005. To my mind it's the Master's definitive scene for the new series: funny and appalling at the same time, and ultimately very sad.

Then we get flying Cybermen attacking the aeroplane - all good - and the apparent death of Kate Stewart - also well-played and rather shocking - and the Doctor's over-the-top Bond-like escape from certain death. It's excessive, but it's the sort of excess I'll happily accept because the rest of the story has been so good. Then we reach a cemetary, and the third act, and to be honest the entire episode collapses.

This episode feels like it was written in a hurry, in one draft, and in chronological order: Moffat furiously typing away at a keyboard, working out what happens next as he goes. Then once we hit the cemetary, it feels like he's realised he's written himself into a corner. The challenge facing the Doctor is simply much too big: billions of dead bodies rising from their graves, converted into Cybermen, all around the world. That it's resolved by three people standing in a graveyard beggars belief. Similarly the Master's ultimate gameplan simply doesn't make any sense, and jibes against everything we've seen in the series so far. It feels thrown together, just like the revelation that it was the Master who manipulated Clara and the Doctor to meet in the first place. Why? We're never told. I personally can't think of a reason. It's all enough to make you throw your hands in the air and walk away.

Then we hit the very climax, in which the Master is suddenly murdered by the Cyber-converted Brigadier Lethbridge-Stewart. I'm genuinely at a loss for words. It felt stupid typing the sentence into this review. Let's take a little step back, for perspective. The Brigadier was introduced in two Patrick Troughton serials in the late 1960s. He was a regular cast member of the series for much of the Jon Pertwee era, and appeared against opposite Tom Baker, Peter Davison and Sylvester McCoy. From first appearance to last he was a presence in the series for longer than any other actor in the series' history. When actor Nicholas Courtney died, Doctor Who already did a remarkable little tribute to his contribution as the Doctor learned in "The Wedding of River Song" that the Brigadier had passed away. Now Steven Moffat has over-written his own tribute with a Cyberman Brigadier flying away, Rocketeer-style, in the sky. It feels garishly tasteless. It feels like a cruel mockery of one of the most widely beloved characters in Doctor Who history, and made me ridiculously angry to have to watch it happen.

Now I'm not an idiot. I know it's just a TV series. It's not as if the Brigadier was real, or that Moffat had his corpse dressed up in silver and jet boots strapped to his body. On the other hand, television forms such a big part of our childhood. I watched the Brigadier for years as a kid. He forms part of the popular culture that helped shaped me into who I am as an adult - and he just got paraded across the screen like some kind of macabre glove puppet. It's as if someone had murdered the Cookie Monster and turned him into a rug, and then ran around on top of it shouting 'look at this rug! Isn't Cookie Monster awesome?!' Well, yes, the Cookie Monster is awesome. So is the Brigadier. I kind of wish Steven Moffat felt the same way.

Of course I spent so long being angry over the abuse of the Brigadier that I didn't really get the chance to properly appreciate the final fate of Danny Pink. It takes too long for the inevitable to happen, and there's only so much slow, sad whispering between Danny and Clara I can take before I start making 'hurry up' motions with my hands. He was a good character, played well by Samuel Anderson, and he absolutely deserved better.

To its credit the episode ends with a beautifully performed denouement, as the Doctor and Clara openly lie to one another and part ways - hopefully for good, but personally I suspect she'll be back for a happy ending at Christmas. This is the most irritating part about "Death in Heaven": when it works it works so well. When it doesn't, it sort of makes you want to put your fist through the television. And then Santa turns up. What's a fan to do?