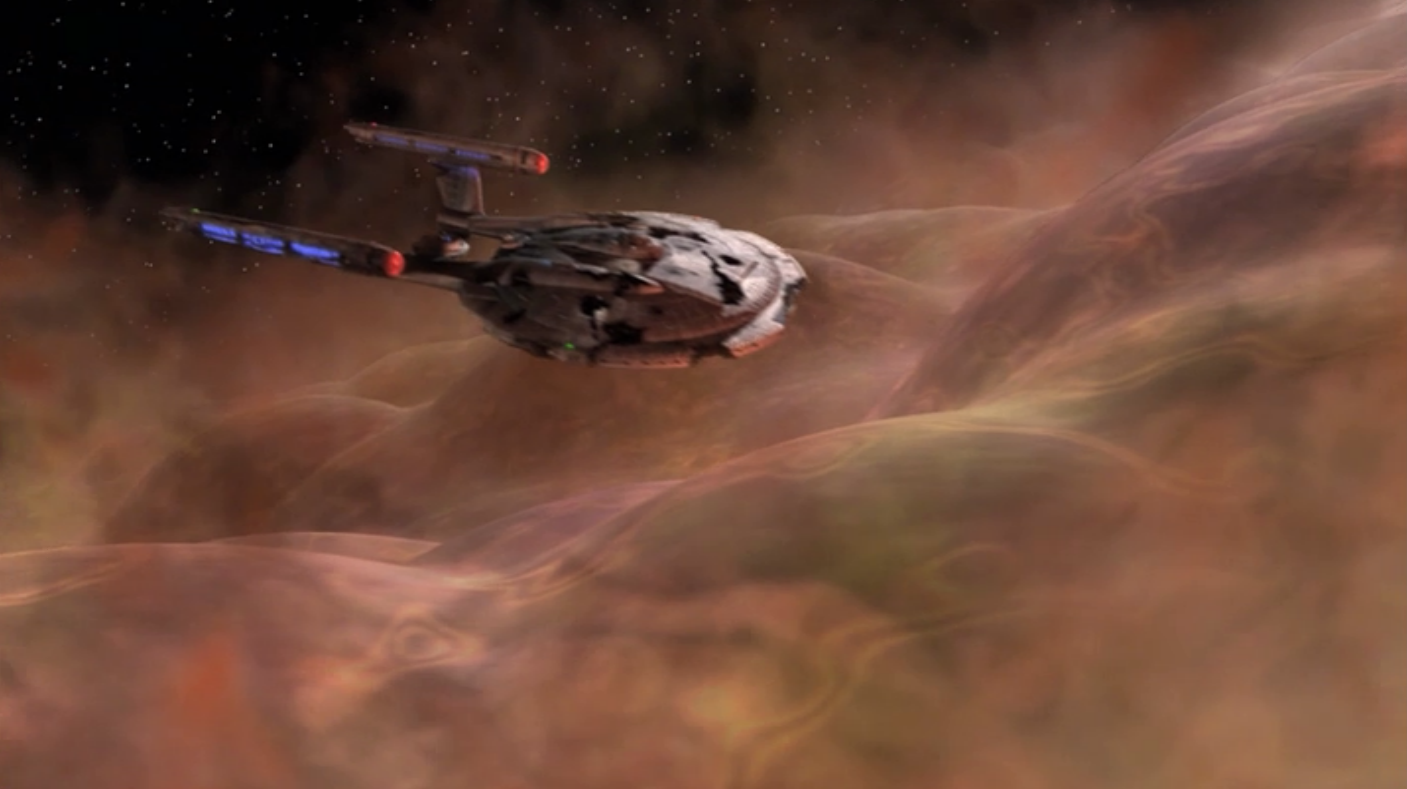 Captain Archer rides a Xindi ship at breakneck speed down a subspace corridor, in a desperate race to reach and destroy the super weapon before it reaches and annihilates the Earth. Back in the Expanse, T'Pol commands the Enterprise in a risky mission to destroy the Guardians' sphere network once and for all.

This episode boasts the most archetypal 'old-school' Star Trek climax imaginable: the Enterprise's captain beams aboard the alien death machine to blow it up, and winds up having a brutal fistfight with the alien leader. It's a climax so archetypal that J.J. Abrams duplicates it in his 2009 reboot movie. Then it will be Chris Pine as Kirk trading blows with the Romulan terrorist Nero (Eric Bana) over a network of precarious walkways. Here it's Scott Bakula as Archer trading blows with the Reptilian Xindi terrorist Dolim (Scott MacDonald). Apart from the change in characters, it's basically the same scene - just five years apart.

Of course both are drawing on the original Star Trek TV series to varying degrees. You can see the influence of the original series throughout Enterprise, but particularly in the manner in which it highlight the three lead characters over the other regulars. We've finished three seasons now, and while Archer, T'Pol and Trip have all been expanded and fleshed out, there's been bizarrely little time dedicated to Mayweather, Reed or Sato. Phlox sits somewhere in between, having had more episodes based around him than the other supporting players, but still playing second fiddle to the lead trio.

All three of the trio get great stuff here. For T'Pol and Trip there's a really nice scene as they prepare to attack the critical Guardian sphere, and T'Pol finally tells Trip her age. For Archer it really is the fisticuffs climax, which is well-paced and nicely shot for a TV episode. They never have much time when making these kinds of shows, so it's impressive how much cinema-like action director Alan Kroeker draws out of the episode. When the end comes, it's immensely satisfying.

That's not to say the episode is perfect. There's a weird unnecessary cameo by Jeffrey Coombs as the Andorian Commander Shran, which mostly feels like the producers like the character and decided to throw him in for the hell of it. There's an even weirder coda, where instead of giving the characters space to celebrate saving the planet Earth the series throws them into some disturbed parallel reality where aliens and collaborating with the Nazis in World War II. It's a season cliffhanger right where one probably wasn't required.

Thankfully in the main this is a brilliant and satisfying climax. The road to "Zero Hour" has been a bit uneven, and has wobbled from time to time, but by its end it's turned out to be a very distinctive season of Star Trek. There were 24 episodes in Season 3, and by my reckoning 15 were good. That makes for a quality ratio of 63%.
Posted by Grant at 9:10 AM