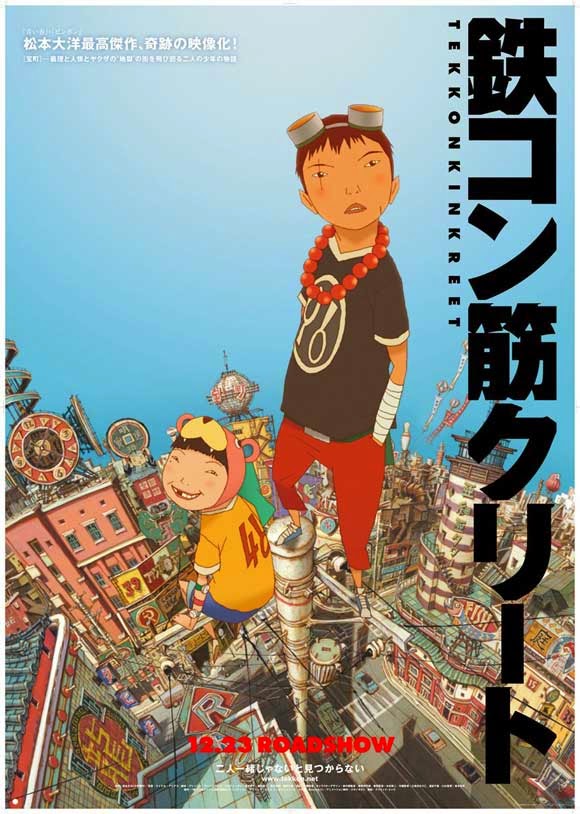 Tekkonkinkreet is a marvellously executed anime, full of unique character designs and innovative animation. Based on the three-volume manga by Taiyo Matsumoto, it tells the story of White and Black, two young brothers living in a run-down inner-city suburb of Treasure Town that comes under threat of the Yakuza – and something more dangerous, and seemingly unnatural. The film won the 2008 Japan Academy Prize for Animation of the Year – and deservedly so. The film tells an odd story, one that initially seems easy to get a handle on but rapidly spirals into something nearly inexplicable. Elements that at first seem to be suggestive of the supernatural wind up seeming directly unearthy and alien.

It begins with the Yakuza making a move on the run-down suburb of Treasure Town, but about 30 minutes in their plans are transformed by Snake – a pointy-haired pale-skinned stranger who dresses in red and has a trio of blue-skinned 14 foot tall bodyguards backing him up. Snake’s plan is to construct a Yakuza-backed amusement park at the centre of Treasure Town, for reasons while are never made clear. At no point does the film explicitly tell us he’s the devil, but they certainly indicate very closely in that direction.

Opposing the Yakuza is Black, a slightly deranged, ultra-violent teenager who makes a living running the streets of Treasure Town. He cares for his younger brother White, a strange young boy who doesn’t appear to relate to the world around him in any normal sense. They’re both appealing characters, and it is through them that we become engaged in Tekkonkinkreet’s story. Other supporting characters also have a lot of appeal, including ageing Yakuza veteran Suzuki and up-and-coming hoodlum Kimura.

The film is gorgeously animated, combining CGI backgrounds and vehicles with wonderful hand-drawn characters. The character design is something quite unlike anything I’ve seen in an anime before, which makes for a nice change. As the film progresses, scenes played from White and Black’s own internalised points of view take on another animated style altogether, positioned somewhere between a children’s crayon picture and an absolute screaming nightmare.

It’s bold and effective. Despite being a Japanese production, the film is directed by Michael Arias, a visual effects worker whose past credits include Total Recall, The Abyss, The Hudsucker Proxy and The Prince of Egypt. Within the anime industry he supervised the 2002 anime project The Animatrix as well as producer Mind Game and Program. Based on his successes here, I’d dearly love to see him direct an anime again.

Tekkonkinkreet is bold, imaginative and striking, and one of the most interesting anime features of recent years.

This review was originally published on Eiga: Asian Cinema.
Posted by Grant at 7:39 AM