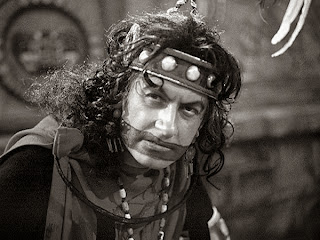 Who50 counts down to the 50th anniversary of Doctor Who by reviewing my favourite episodes and serials over the history of the programme, counting down from #50 to #1. Today, #4: "The Aztecs", a 1964 serial written by John Lucarotti and directed by John Crockett.

The TARDIS arrives in ancient Mexico, where the Doctor and his companions encounter the legendary Aztecs and Barbara is mistaken for an incarnation of the goddess Yetaxa. When she sees this as an opportunity to turn the Aztecs away from human sacrifice it puts her on a collision course with the Doctor, who refuses to allow her to divert the course of history.

If there's a single line of dialogue that echoes throughout Doctor Who's first three years, it's this: 'you cannot rewrite history - not one line!' Contemporary viewers of Doctor Who expect a free-wheeling mucking about with history in the series, however during William Hartnell's tenure as the Doctor it was a very different state of affairs. The Doctor could interfere with the future, but never the past. His goal in these early historical serials was to escape, and never to change events. It's what drove "Marco Polo", which I discussed some time ago, and it's what gave "The Time Meddler" and "The Massacre of St Bartholemew's Eve" such frission. It's in "The Aztecs" that this stance of non-interference is tackled head-on: Barbara wants to change the Aztecs to save their civilization, and the Doctor is intent upon stopping her from succeeding.

It's rather surprising that a family drama broadcast in the early evenings would focus directly on subject matter as confronting as religion, ethics and human sacrifice. At the core of "The Aztecs" is a remarkable ethical debate: is it responsible to let history progress in the fashion to which it is destined, or to directly intervene and force your own personal beliefs onto others?

Of course "The Aztecs" wouldn't be an entertaining story if it was simply an ethical debate. Thankfully it's rich with detailed characters who are written and performed like Shakespeare. In particular John Ringham is marvellous as the Machiavellian high priest Tlotoxl, who rapidly wises up to Barbara's lack of godhood and starts manipulating people against her. He's basically playing the part like Shakespeare's Richard III, something that works brilliantly in the heightened, theatrical atmosphere of early Doctor Who. Also good is Keith Pyott as fellow priest Autloc, the most human and resonant of the serial's guest characters.

The serial is also distinct in that it gives the Doctor a love interest - the elderly Aztec woman Cameca, to whom the Doctor accidentally finds himself engaged. In the end she gives the Doctor information he needs to escape to the TARDIS, despite knowing she will not see him again. Significantly, the Doctor pockets the brooch that she gave him - he may leave at the end, but we're left in no doubts that her affections were on some level reciprocated.

The bottom line is that "The Aztecs" is incredibly entertaining television. It boasts some meaty issues, well-written drama and strong, three-dimensional performances. Even now, 49 years later, it stands out. In the early years Doctor Who featured many historical serials: "The Aztecs" is the best one they ever did.

This is the highest-ranked Doctor Who story to feature William Hartnell in the role of the Doctor. In total his era has come up four times: not only here, but in "Marco Polo" (46th), "The Time Meddler" (43rd) and "The Massacre of St Bartholemew's Eve" (10th).
Posted by Grant at 10:11 AM