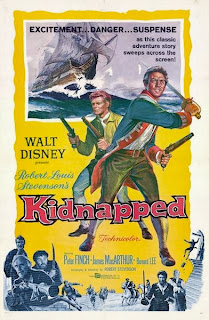 Kidnapped is a historical novel by Scottish author Robert Louis Stevenson, in which a young 18th century Scot named David Balfour receives an inheritance, is betrayed by his uncle (who wants that inheritance for himself) and subsequently escapes slavery with the assistance of the Jacobite rebel Alan Breck Stewart. It was a big success for Stevenson back in 1886 and inspired not only an 1893 sequel (Catriona) but also seven feature film adaptations from 1917 to 1995. I recently watched the fourth of the seven films: the 1960 version, directed by Robert Stevenson (no relation) and produced by Walt Disney.

This is definitely "Walt Disney's Kidnapped". As a producer Disney kept a very firm creative hand on his films. He was often quite heavily involved in the story and scripting process, and was particularly keen on dictating how the films be edited during post-production. The actual shoot in between he left largely to his directors, whom he selected based on their ability to give him enough coverage (different takes and camera angles of each scene) to determine much of the film's content and tone in the editing room. Stevenson was one of his more prominent directors: he directed a string of Disney pictures between 1957 and 1976, including Old Yeller, Mary Poppins, The Shaggy Dog, The Absent-Minded Professor, The Love Bug, Blackbeard's Ghost and Bedknobs and Broomsticks.

There is certainly a house style to Walt Disney's live action features. They're staged in a very old-fashioned sort of way: even in the 1970s they were being shot in much the same style as in the late 1950s. There's also a predilection for historical stories set in Great Britain: Kidnapped is one of several Scottish-set films produced by the studio, along with Rob Roy the Highland Rogue and Greyfriar's Bobby. Despite the regular British setting there is also a tendency to cast Americans in many of the lead roles, with little regard to the authenticity of their accents. Kidnapped stars James MacArthur, whose Scottish accent is about as torturous as bad accents get. On the other hand the films are often rich with quality British actors. Kidnapped is boosted by the likes of Bernard Lee, John Laurie, Peter O'Toole and Oliver Johnston.

The highlight of the film, however, and the best reason for watching it, is Australian actor Peter Finch as Alan Breck Stewart, the flamboyant rogue who defends and assists David Balfour throughout the film. Like MacArthur, Finch's Scottish accent is somewhat suspect, but he fills his part with a wonderful amount of gusto and charisma. He remains one of the best actors Australia ever had, and this part - miles away from his signature role as Network's Howard Beale - goes a long way to demonstrating his versatility.

This is not a groundbreaking or particularly distinct film, but it is an entertaining one. It's perfectly designed for a lazy Sunday afternoon: charming, undemanding and enjoyable.
Posted by Grant at 4:49 PM