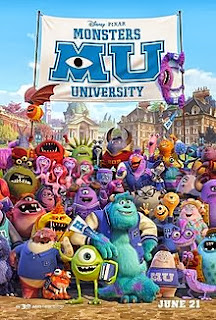 It used to be that Pixar Animation Studios was the safest bet in Hollywood for seeing a good movie. From 1995 to 2010 they enjoyed an uninterrupted run of critically acclaimed and commercially successful hits. They were all based on such great ideas, and featured distinctive and appealing characters. It's an outstanding run: Toy Story and its two sequels, A Bug's Life, Monsters Inc, Finding Nemo, The Incredibles, Ratatouille, Wall-E and Up.

Now I personally didn't warm to Cars but appreciate that many did. Sadly its 2011 sequel Cars 2 broke the winning streak: it might have made money, but critics hated it and from my experience audiences weren't particularly impressed either. Brave might have suggested a return to form, but sadly that return was short-lived: Monsters University is a disappointing prequel, showing promise in fits and starts but never achieving anything close to the originality, energy and heart that I've come to expect from Pixar. It's not a bad film, but it is a very disappointing one, and whacks another dent into Pixar's previously impeccable body of work.

Part of the problem is its setting: this is a prequel, so we already know where the characters will ultimately wind up. There's very little tension or suspense, although some credit is due to how the film unexpectedly reaches its conclusion. Generally speaking, however, I find prequels boring. I want to know what happens next: if any of this film was that important, they would have shown it to me first rather than a decade down the line.

The second problem is the story: this is basically a rehash of every 1980s jocks versus nerds film that you've ever seen. Sure it's got some funny moments and clever jokes, but it's a pastiche - and that's simply not what I've come to expect from Pixar. I expect brilliant ideas and jaw-dropping premises, not a reheated Revenge of the Nerds. The first few scenes demonstrate some of the brilliance I've come to expect, as does the climax, but in between there's at least an hour of very ho-hum family entertainment. Bad? No, but certainly in the context of Pixar's back catalogue it's mightily disappointing.

I think that's the film in a nutshell: not bad, but very disappointing. Monsters Inc was one of the cleverest and most inspired animated films of its decade. Monsters University is a commercial exercise. With Pixar already committed to at least one sequel or prequel every two years I worry there's more mediocrity to come.
Posted by Grant at 7:40 AM