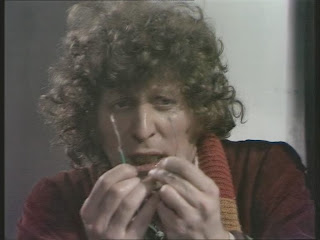 Who50 counts down to the 50th anniversary of Doctor Who by reviewing my favourite episodes and serials over the history of the programme, counting down from #50 to #1. Today, #2: "Genesis of the Daleks", a 1975 serial written by Terry Nation and directed by David Maloney.

If there's a moment in Doctor Who that encapsulates why the character of the Doctor is such a special one, it's to be found in "Genesis of the Daleks": the Doctor (Tom Baker) holding two wires that, if touched together, will spark an explosion and erase the Daleks from history. If this was an American hero, let's say Star Trek's James T. Kirk, he'd whack the wires together, kill all the Daleks and beam back up to Enterprise. If this was a traditional hero, doubt would not enter the picture. This, however, is the Doctor. He's different. He agonizes over the decision, and abhors the responsibility and - ultimately - can't bring himself to do it. They may be the Daleks - the most destructive species in the history of the universe - but they're also a species. The Doctor can't commit genocide without making himself as callous a killer as the Daleks are.

Of course later iterations of Doctor Who do muddy the waters a bit: by "Remembrance of the Daleks" in 1988 Sylvester McCoy answers Tom Baker's "do I have the right?" with a resounding "yes", tricking Davros into using the Hand of Omega and destroying the entire planet Skaro. By the new series the Doctor is a PTSD-afflicted survivor haunted by murdering not only all of the Daleks but all of the Time Lords as well. What's important, however, is not whether or not the Doctor commits genocide - it's that he has the moral indecision about it at all.

By creating the Daleks Terry Nation guaranteed Doctor Who's long-term success, and out of all the serials he contributed over the series' first 17 years, it's "Genesis of the Daleks" that remains his masterwork. It's a six-part epic that actually uses its length appropriately. It tells a thrilling and dramatic science fiction adventure. It asks some interesting moral questions. It doesn't bore us with the answers.


Of course as it's a serial all about the origins of the Daleks, it's not really a Dalek story at all. Instead it's all about a mad scientist, Davros, and his murderous hubris that extends beyond xenophobia or military duty. In one of the best scenes Doctor Who has ever enjoyed, the Doctor asks Davros if he had invented a virus, one that could wipe out all life if released, would he ever release it? Davros (played here by Michael Wisher - the best of all four Davroses) actually holds his hand up, as he imagines what it would be like - and then he shatters the imaginary vial with his fingers. 'Yes,' he cackles, 'I would do it!' There are just a few moments in Who history when the mad villain suddenly comes across as genuinely frightening. "Genesis of the Daleks" definitely has one of those moments. Like all brilliant villains, Davros worked best the first time - pretty much every appearance the character made after this point wasn't as strong as the appearance before it.

By focusing solely on the Doctor and Davros, it's possible to overlook the remainder of the serial's cast. Truth be told, "Genesis of the Daleks" has one of the best sets of supporting characters you're likely to find - whether it's the conflicted Gharman or the steely, uncompromising Nyder. The Doctor's companions are fantastic as well: the combination of Tom Baker's Doctor, Elizabeth Sladen's Sarah Jane and Ian Marter's Harry is one of my favourites. What am I saying? It's one of everybody's favourites.