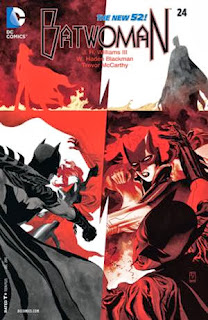 Batwoman was a monthly comic book that was a long time coming: after her debut in 52 it was a few years before the character got a high profile storyline in Detective Comics, and it took until the New 52 for her to finally get a book of her own. J.H. Williams III provided the artwork throughout, and with co-writer W. Haden Blackman and co-artist Trevor McCarthy he's chronicled a full two years' worth of adventures for Kate Kane and her circle of supporting characters.

Williams and Blackman have resigned from the book, however, citing constant laste-minute interference at the editorial level, including several changes of storylines already partially published. They were initially going to bow out with December's issue #26, but instead their final issue is now:  Batwoman #24 sees the long-brewing showdown between Kate Kane and Batman reach a head. They finally come to blows and-

And that's it. This is an issue that doesn't end so much as stop in mid-sentence. If you're anything like me you'll turn the page expecting to find a cliffhanger and instead it's house ads for other DC books. I've never seen a comic book end so abruptly. Given that Trevor McCarthy's art has been 'finished' (whatever that means) by Sandu Florea and Derek Fridolfs, I can't help but feel that the entire creative team either walked away or got kicked off with this issue half-cooked, and rather than delay or replace it DC simply neatened it up where they could and released a half-complete comic book to market. If true, that's tremendously unprofessional: I'm a paying customer, and expect an actual finished comic book when I purchase one. (1/5)

Under the cut: reviews of Batman and Two-Face, Hawkeye, He-Man and the Masters of the Universe, Uncanny X-Men, Wonder Woman and X-Men Legacy.

I was wondering what Batman and Robin would do regarding its title once it had run through all of Batman's other sidekicks and companions - turns out we're onto the villains, with the New 52 re-imagining of Two-Face's origin taking centre stage. Tomasi, Gleason and Gray are the workhorses of DC's Bat-line, producing consistently entertaining Batman comic books every month like clockwork. This issue's no exception. (4/5)

I completely support Marvel's decision to publish this book at the speed that its writer and artists produce it, and not force in a bunch of fill-ins. It's consistently worth the wait. This issue is a bit unusual, because it overlaps with quite a few events we've already seen, giving another perspective on them and generally pushing the characters forward. Beautiful panel layouts, artwork and colours (by Matt Hollingsworth). (5/5)

He-Man and the Masters of the Universe #7

The second story arc kicks off with Dan Abnett taking over as writer for the next few issues and Rafael Kayanan providing some genuinely off-kilter artwork. It's a solid read, and certainly feels as if DC is pushing the book in a more interesting direction. Nostalgic toy owners of the 1980s might get a kick out of seeing Grizzlor make his debut. I'm still not certain about that artwork, though. It feels inappropriate for something this high in action and pulp fantasy. (3/5)

This issue has five inkers. That seems like a lot. Maybe Marvel is running behind on this crossover, or maybe they figured it'd be a lark to have one inker for every time period of X-Men that seems to be running around at the moment. There are one or two big plot developments in this issue, and things do genuinely feel as if they're building to something of a climax. Two parts to go - I really hope they don't foul it up. (4/5)

Brian Azzarello has made some pretty significant changes to Wonder Woman's universe and character over the past two years. Her revised origin caused its fair share of complaints (and to a degree rightly so), and now she has an entirely new status quo: the God of War is dead, and Diana has been forced to take his place. I really like the soap opera-like antics of the Greek pantheon as seen through the lens of Azzarello's writing, and the idea of a super-heroine as the Goddess of War is a potent one. This comic is firing on all cylinders at the moment - top stuff! (5/5)

I think this may have been the best issue of Legacy so far: it's utterly surprising, blindsiding me completely in a way that's both unexpected and satisfying. Spurrier's been writing an extraordinarily clever X-book here, and the rotating teams of artists (Koi Pham this month) has served the story very well. It's wrapping up soon, and this issue certainly feels like things are reaching a natural conclusion. I don't mind that - more comics should have a limited shelf life. There's nothing more tedious than outstaying your welcome. For now, X-Men Legacy is very welcome indeed. (5/5)