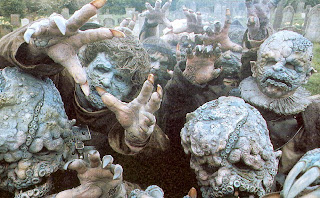 Who50 counts down to the 50th anniversary of Doctor Who by reviewing my favourite episodes and serials over the history of the programme, counting down from #50 to #1. Today, #3: "The Curse of Fenric", a 1989 serial written by Ian Briggs and directed by Nicholas Mallet.

The Doctor and Ace arrive at a British naval base during World War II - on precisely the same day that a secret Russian mission has commenced to infiltrate the base and steal a vital code-breaking machine. At the same time something ancient and evil is stirring in the ocean off nearby Maiden's Point - and the Doctor may know a lot more about what's going on than he's letting on.

Okay, we're getting to the point in this countdown that I feel pretty comfortable describing these serials as masterpieces. "The Curse of Fenric" is a stunning work of televisual science fiction, rich in plot and character, filled with moments of horror and tension and soaked in theme and tone. It is a near-faultless serial, giving Doctor Who its best four episodes since the mid-1970s and promising a bold new direction for the series going forward. It is, of course, a cruel irony that by the time this serial went to air on BBC1 Doctor Who had been cancelled. All of the promise of "The Curse of Fenric" would have to wait 16 years to be fulfilled by Russell T Davies in the new series.

It's also sad to note that this was Ian Briggs' final work for television. He made his debut in 1987 with the enjoyable Doctor Who serial "Dragonfire", which introduced the companion Ace (Sophie Aldred), and "The Curse of Fenric" was his follow-up. Asides from novelizations of both stories, he never wrote professionally again and now works in IT. I can't help but feel that British television has lost out on one of its more promising writers.

This is, ultimately, a story about faith. Not religious faith, although religion pays a significant part. Instead it's more about faith as a sort of trust. Those who have a strong faith in their friends or their family will survive. Those who lack that conviction will perish. Of course, in the end this story has a body count almost as overwhelming as "The Caves of Androzani", so it would seem that Briggs doesn't think most people's faiths are up to much.

The villain of the story is Fenric, an alien intelligence trapped in a bottle, genie-fashion, by the Doctor in a previous and unseen adventure. It has an unexplained effect, however, over the descendants of the Vikings that discovered the bottle and transported it from the Middle East to the English coast. The descendants, the "wolves of Fenric" (which was the serial's much better working title), have congregated at the same base on the same day to set Fenric free - and to bring about the end of the world. Each of these 'wolves' - the crippled mathematician Judson, the base commander Millington, the Russian Captain Sorin - has a crucial part to play in Fenric's master plan. Of course, another one of the 'wolves' is Ace.

Ace was a brilliant companion. Of course, if we look at her now she seems faintly ridiculous, as if the Doctor was accompanied by one of the kids from Grange Hill; full of the most bracingly reserved middle-class ideas of what British teenagers are like. It's clear, however, that Ace is the forerunner to the companions of the new series. She has a family, and a past, and more than two dimensions. One of the most intriguing aspects of Season 26, which included "The Curse of Fenric", is that three out of four serials focus not on the Doctor but on Ace and her personal development. The Doctor uses her like a pawn in his long game against Fenric, certainly, but he also uses the events of the story to help her resolve trust issues with her estranged mother. He manipulates her on the one hand, and improves her as a person on the other.

I've mentioned several times that Doctor Who works best when it's working as pastiche. "The Curse of Fenric" is pastiche done as a sort of collage. There are elements in this story drawn from Dracula, Norse myth, World War II films, Aliens, and even other episodes of Doctor Who (the Haemovore's rise from the ocean, for example, is a visible and obvious riff on "The Sea Devils"). Briggs has tied it all together, and painted a layer of depth over it all at the same time. The horrific bits work, the action bits work, and the moments of humour (admittedly few and far between) work. It's a genuinely stunning piece of television.

I've rattled on for ages and not really mentioned the Haemovores, the nominal "monsters" of the story. They're functionally vampires, except they're mutated remains of people lost at sea in the waters off Maiden's Point, corrupted by toxic poisons generated by Fenric and bloated into blue-white combinations of rotting corpse and barnacle-encrusted sea creatures. They are an amazing feat of design, and it's sad that - due to the restrictions of the story they're in - they'll never be seen again.

This is Sylvester McCoy's final appearance in the Top 50. His Doctor previously appeared in my reviews of "Remembrance of the Daleks" (#19) and "The Happiness Patrol" (#31). On a sentimental level he remains my favourite Doctor; the first issue of Doctor Who Magazine I ever purchased featured the announcement that he had been cast in the role, whereas my participation in organised Doctor Who fandom kicked in pretty much exactly as the series was cancelled.
Posted by Grant at 11:58 AM