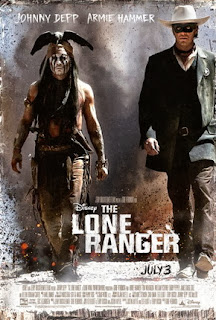 In 1869, attorney John Reid is caught with his brother and a group of Texas Rangers in a fatal ambush. Left for dead, he is nursed back to health by Comanche Native American Tonto and persuaded to don a mask and seek revenge as the anonymous "Lone Ranger".

Disney's The Lone Ranger is a difficult film to review because it's not a great movie and it's not a bad one, yet certain aspects are brilliant and certain aspects are tedious in the extreme. One thing the film certainly represents is a textbook instruction manual for a Hollywood studio to lose money. It's impossible to look at the film and not think of how grossly unsuitable for mainstream success it is. The studio heads at Disney must have been asleep at the wheel. Or drunk. Possibly even on drugs.

The company must be happy to have such strong merchandising, animation and theme park revenues, because of course they've bet the farm on live-action cinema and lost, not once but twice in a row. 2012's John Carter was a costly commercial misfire, and The Lone Ranger is shaping up to be even worse. The combined budget and advertising costs of the two films must be somewhere in the region of $700 million dollars. Their combined gross revenue is about $500 million. All up, industry pundits estimate their combined total loss at about $300 million dollars. In effect, Walt Disney Pictures could have made the profit of a new Pirates of the Caribbean picture by sitting still and doing nothing.

Despite some critical drubbings The Lone Ranger is still a watchable and fairly enjoyable western adventure. Armie Hammer is great as John Reid, aka the Lone Ranger, and has an amiable and charismatic presence that makes him a Hollywood megastar-in-waiting (provided his career survives The Lone Ranger). Johnny Depp is distinctive and theatrical as Tonto, giving another broad performance that's distinct from other recent characters yet still sits neatly alongside them. These kinds of abstract characters are definitely his strength, although its open to debate whether Disney should perhaps have cast another Native American in the role (Depp himself claims to be one-eighth Cherokee). The supporting characters are filled out with a typically strong assembly of players including Tom Wilkinson, William Fichtner, Helena Bonham Carter and Stephen Root. It's always been a successful strategy for producer Jerry Bruckheimer: fill your film with quality actors and they can make the most asinine of screenplays seem like gold. The film is also very well shot and features a strong musical score by Hans Zimmer.

Where things fall down is in terms of pace, plot and genre. It has to be said that this is an overly-long film, taking roughly 90 minutes of story and spreading it out across two-and-a-half hours. It starts well and ends well, and wastes an awful lot of time in the middle. The plot is also irritatingly familiar, comprising roughly 50% each from Martin Campbell's The Mask of Zorro and The Legend of Zorro. It's all mixed up together, of course, giving the whole picture a constant and slightly irritating sense of deja vu. Finally there's the genre: the western is such a distinctive and precise genre of film that it's difficult to stand out from the crowd. Despite the odd quirk and flourish, there's very little done in this film that hasn't been done before. Early drafts of the screenplay (they started work on this film six years ago) featured werewolves: it's a shame they didn't stick with a supernatural angle in the final production.

Overall I just can't stop questioning why Disney elected to make this film at all. The budget was in the region of $200-$250 million dollars. What on Earth convinced Disney to spend a quarter of a million dollars on a generic western featuring Johnny Depp wearing a dead bird as a hat? Wild Wild West flopped. Cowboys and Aliens flopped. Jonah Hex flopped. It's the very definition of insanity: spending huge amounts of money repeating the failures of other film studios, and expecting a different result. The Lone Ranger is watchable, and intermittently it's even rather enjoyable, but holy hell it's a creative mess.
Posted by Grant at 11:23 PM