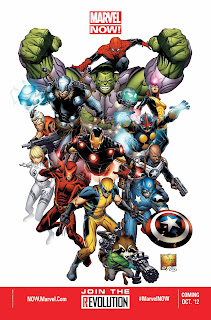 Thank goodness DC has finally completed its Zero Month and we can all return to a normal schedule of monthly superhero comics. All that I'm left with now is a vague sense that September cost me unnecessary time and money for the most part, and a growing concern that in September 2013 we're going to get a return to DC 1,000,000 or some other randomly contrived sales stunt.

Of course the next big comic sales stunt is Marvel Now, where most of Marvel's comics are getting relaunched with new first issues. I doubt this relaunch will be anywhere near as impactful as DC's: firstly, they're not rebooting but simply relaunching; secondly, they've already relaunched so many of their titles that a new #1 doesn't seem particularly special. There's a hilarious advertisement in this week's Daredevil: End of Days advertising the final issues of Captain America and The Mighty Thor with the slogan "The end of an era!". Yeah maybe, but when those last issues are #19 and #22 respectively, that's a really short era indeed.

Grant Morrison writes a story specifically for Halloween, with a ghostly haunting in the Fortress of Solitude. It turns out to be one of the most heart-warming comics I've read in a while, particularly the back-up story written by Sholly Fisch. That said, there's still a nagging problem I've had with Morrison's run on Action Comics. Despite individual issues being well-written and drawn, often highly imaginative and entertaining, they never feel as if they're part of a coherent whole. It feels fractured and confused, and I find myself struggling to maintain enthusiasm for the book overall. There are only four issues of the Morrison run left before Andy Diggle purportedly takes over - hopefully Diggle's run will maintain the imaginative concepts but give them a stronger narrative to underpin them. (3/5)

Is it just me, or is Animal Man a crushingly slow-paced comic book? Here we are, 14 issues in (15 if you include the annual) and the first story arc is still crawling along. It's been an entertaining read for the most part, but I keep feeling like I want my superhero comics a little faster in the plot department. Here Buddy returns to Earth from the Red to discover a year has past, the world is in ruins and almost all the superheroes in the world are dead. On the one hand it's a great shock opener to the Rotworld arc (really just a continuation of the one arc), but on the other it's dreadfully undramatic since we know going in that something is going to turn back time or handwave the devastation of the Earth away. (3/5)

I continue to love Batwing, which is gradually populating the whole of Africa with a variety of new superheroes and villains. This issue is essentially more of the same action and intrigue that readers have come to expect. It's never been the best superhero comic in any given month, but it's absolutely one of the most consistent. It's also never lost sight of its setting, with the political realities of civil war, police corruption and poverty never far away from the story. Finally, it's nice to see the comic slowly weaning itself from constant Batman cross-overs - it shows a growing trust on DC's part with the character. (3/5)

This is an eight-issue miniseries, set in a hypothetical future, in which Daredevil is brutally murdered in the street by about the fifth page. The rest of this issue is taken up by Daily Bugle reporter Ben Urich doing his best to write an obituary for one of New York's greatest heroes. It's written by Daredevil veterans Brian Michael Bendis and David Mack, and brilliantly so. Not only does it use multiple narrative voices, both voices belong to Urich. That's tricky to pull off, and they do it amazingly well. We get to see his journalist voice and his personal voice and further revelations and insights through dialogue. The book is illustrated by Klaus Janson and Bill Sienkiewicz, arguably bigger legends in the history of Daredevil than Bendis and Mack. The art is stunning: scratchy, detailed, atmospheric and striking. With an intriguing cliffhanger to top it all off, this is one miniseries that I'm going to be following with keen interest. (5/5)

A new writer, and new artist, and a massive improvement in quality. I've been quite critical of Detective Comics since it relaunched last year under the control of writer/artist Tony Daniel. Daniel has moved on, and his replacements (Layman and Fabok) hit the ground running with a new storyline with the Penguin targeting Bruce Wayne. This is well-written, extremely solid Batman with good artwork. Let's hope the fresh creative team help lift DC's second-oldest title out of the doldruns and do something really special. (3/5)

I always find it strange when real-world political leaders appear in superhero comics. I remember finding it deeply weird in Batman when Ronald Reagan would show up in "The Ten Nights of the Beast" or the Ayatollah Khomeni would give asylum to the Joker in "A Death in the Family". Here Barack Obama orders Amanda Waller to capture the suspected terrorist turned Green Lantern Simon Baz. For some reason this collision of real-world figures with fictional heroes completely throws my suspension of disbelief. This issue is actually a stronger read than last month's #0, advancing Simon Baz's story and expanding on his character. I'm enjoying him a lot, although given the Earth already has four Green Lanterns it seems unlikely that he's going to stick around for long. Johns does lose a lot of style points for his cliffhanger: "You're in deep trouble... like, Justice League trouble!" is not a sentence any version of Superman that I know would say. Here's one final thought: Warner Bros owns DC Comics. They also own The West Wing. Let's have Jed Bartlet as President of the DC USA. (4/5)

Another week, another high-concept science fiction miniseries from Image Comics. This one, in which some kind of cataclysmic disaster has led to toys and other inanimate items (dolls, teddy bears, mannequins, etc) coming to life and gaining sentience. Against this backdrop is a typically gritty story about rain-slicked Los Angeles streets and mismatched buddy cops. Sadly, aside from its wonderfully bonkers premise, there's an annoying sense of "been there, done that" about the whole affair. It may improve, but it's certainly not the best SF Image has produced in the last few months. (2/5)


DC Comics. Written by Peter Milligan. Art by Will Conrad.

Etrigan the Demon debuts in the modern-day DC Universe in a surprisingly great issue. My continued reading of Stormwatch has been hanging by a thread for the past year, constantly raising my hopes a little and then dashing them terribly. This issue starts off a new storyline and is easily the best instalment of the comic so far. It's atmospheric, rich in character and builds to a sensational cliffhanger. Obviously the pressure's now on for Milligan to follow it up, but this issue has definitely saved my purchase of Stormwatch for at least the next two months. (4/5)

This is a wonderful self-contained issue that separately highlights the day-to-day activities of Power Girl and the Huntress. Each character gets her own storyline in which to shine, and Levitz provides wonderfully written linking sequences to show just how close friends these two women are. I'm loving this book to bits: it has a much brighter, less savagely violent tone than much of the New 52 and regularly features delightfully clean, easy-to-follow artwork. Power Girl's penchant for obliterating her costume and running around half-naked even gets some well-earned and knowing mockery. This is a female-led superhero comic with a focus on friendship, trust and character rather than overt violence and sensationalism: what's not to love? (5/5)

Winner of the Week: It's a toss-up between the grimy artfulness of Daredevil: End of Days and the optimistic friendship of Worlds' Finest. I honestly can't feel as if I can pick.
Loser of the Week: Non-Human isn't a terrible comic by any stretch, but coming after Revival, Happy, Saga, Planetoid and Debris, it feels sorely undercooked and uninvolving.