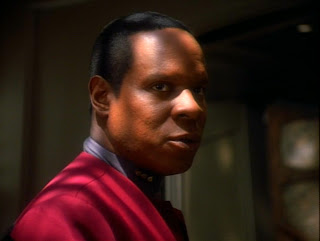 "On Earth, there is no poverty, no crime, no war. You look out the window of Starfleet Headquarters and you see paradise. Well, it's easy to be a saint in paradise, but the Maquis do not live in paradise. Out there in the Demilitarized Zone, all the problems haven't been solved yet. Out there, there are no saints — just people. Angry, scared, determined people who are going to do whatever it takes to survive, whether it meets with Federation approval or not."

In one fiery, determined monologue, Benjamin Sisko (Avery Brooks) lays out the precise difference between Deep Space Nine and the rest of the Star Trek franchise. It's been coming for almost two seasons, but with "The Maquis, part 2" Deep Space Nine finally hits its groove and finds its purpose. This episode represents the final shift of a series from black and white morality to graduating shades of grey. We see Sisko bending Starfleet's rules in the hope of redeeming his friend. We see new, previously unseen depth and empathy within Gul Dukat. We see Quark outwit a Vulcan over logic. Nothing is purely right and wrong any more. No one is good and evil. Everybody is strong and frail, smart and foolish, courageous and cowardly. From hereon in, and more than any other science fiction drama in history, Deep Space Nine presents a nuanced, three-dimensional and fallible vision of the future.

It's usually quite rare in Star Trek for the second half of a two-part story to match the first. "The Maquis" is an exception, presenting a gripping, intelligent and morally difficult challenge for Sisko and his crew. Avery Brooks delivers a standout performance here, in turns quiet and brooding and then roaring with frustration and anger.

While I was impressed with Marc Alaimo's performance as Gul Dukat in part 1, he blows that performance out of the water here with a turn that redefines and complicates his character immeasurably. He's supported by an excellent script. His scene opposite Sisko, where he arrogantly declares that Cardassians don't make mistakes - and then learns his own people have marked him as a traitor - is a particular highlight. In a similar fashion, Quark's scenes with the Vulcan Maquis operative - which were excellent in part 1 - are absolutely exceptional here. His use of the Rules of Acquisition to argue for peace is masterful.

If there is a letdown in this episode, it's the climax. It happens a little too quickly and rather too neatly. This isn't a self-contained episode, however, and deliberately so. The lack of a proper climax is almost part and parcel of the episode's whole argument: things aren't simple; you can't tie up every storyline with a neat little bow and a slap of Star Trek's infamous reset button.

Taking both episodes together, "The Maquis" isn't simply an immensely enjoyable story: it's a necessary one. This is the argument for the series as a whole, and a must-see for anyone who has an interest in watching and enjoying this series. 15 good episodes out of 21, or 71% - it may have stumbled a little out of the gate, but in its second half Deep Space Nine Season 2 is must-see TV.
Posted by Grant at 11:55 AM