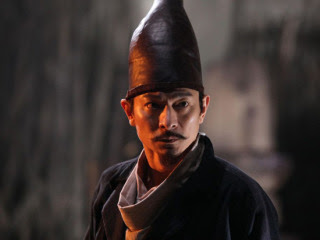 Recent years have seen Hong Kong’s most popular directors of the 1980s and early 1990s make their respective comebacks. John Woo returned from a lengthy period directing in Hollywood to helm the magnificent two-part Red Cliff. Ringo Lam rebounded from a fallow period with such hits as Fire of Conscience and The Stool Pigeon. Finally Tsui Hark, who directed and produced some of Hong Kong’s most outstanding and popular hits – including Once Upon a Time in China and Zu Warriors from the Magic Mountain – has returned to form with the bright, energetic and engaging mystery adventure Detective Dee and the Mystery of the Phantom Flame.

The coronation of China’s first Empress is fast approaching. To commemorate her ascension, the Empress (Carina Lau) has commissioned an enormous statue of Buddha to be constructed in front of the royal palace. Construction is proceeding according to plan when two leading imperial dignitaries inexplicably burst into flames and die. To solve the mystery of the ‘phantom flame’, the Empress summons Di Renjie (Andy Lau), a talented detective whose political opinions have seen him imprisoned by the Empress for the past eight years.

Detective Dee is a delight: it is fast-paced, intriguing and well-performed. In many ways it is an active throwback to the sorts of action-adventure films Hong Kong became famous for in the 1980s and 1990s. Scenes of plot development and broadly-sketched character are regularly interspersed with frantic sequences of acrobatic kung fu. Of course as a production of the 2010s Detective Dee is blessed with extensive digital effects and backgrounds, giving the picture the sort of rich, expansive backdrop that earlier productions could not afford.

Andy Lau makes for a thoughtful and dignified lead. In many respects Detective Dee is similar to Guy Ritchie’s American film Sherlock Holmes, in which the famous literary detective was re-envisaged and re-shaped to accommodate the tastes and aesthetic of contemporary cinema. The same process has occurred here, transforming the very real 7th century detective and statesman Di Renjie into an early period forensic specialist and master martial artists.

Lau is supported by an excellent supporting cast. Carina Lau is masterful as the middle-aged, scheming Empress, and it’s a pleasure to see her on-screen again after a four-year break from performing. Fan Bingbing plays Shangguan Jing'er, the Empress’ closest confidante and skilled combatist. It is a role that gets more nuanced and complex as the film goes on, and Fan does a great job with the part. Tony Leung Ka-fai and Deng Chao also give strong supporting performances.
Combining action, suspense and mystery with action, visual spectacle and extensive visual effects, Detective Dee is very much the Chinese equivalent of the American summer blockbuster. It is a testament to the strong talents of the Chinese film industry that, on a budget of roughly USD$20 million, Tsui Hark and his crew present an action-adventure that stands head and shoulders above most of Hollywood’s blockbusters over the past 12 months. Twice the movie at one-tenth of the budget, Detective Dee is popular Chinese entertainment at its finest.
Posted by Grant at 12:13 PM