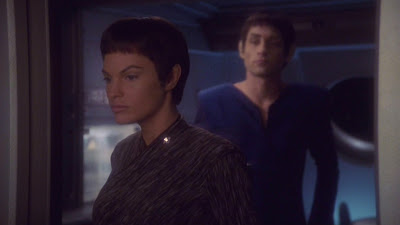 While exploring a nebula, the Enterprise makes contact with a lone Vulcan starship. Its crew have left their home planet to freely explore their own emotions - something that T'Pol claims is extremely dangerous. As the Enterprise team help make repairs to the Vulcan vessel, T'Pol is convinced by one of its crew to experiment with emotions herself - with unsettling results.

I am not going to beat around the bush with this one: this is an episode about rape. It's unsettling, difficult and more often than not deeply seedy and upsetting. There isn't a physical rape in sight, instead it's all telepathic. The tone, the emotional beats and the damage, however, are all clearly recognisable. If you find dramatic depictions of rape upsetting I recommend you give this episode a miss. If you can handle such material okay, I'm honestly still unsure on whether you should watch it or not: despite some good scripting and performances, the entire episode left an unpleasant taste in my mouth.

The core problem with the episode is the Vulcan scientist Tolaris (Enrique Murciano). T'Pol is assigned to cooperate with him in scanning the nebula, and as they spend time together he consistently pushes on her the idea of not meditating at night any more, and to find out what happens. If Tolaris was a more charismatic, appealing character, there could be a good story here. Unfortunately he screams "sexual predator" from the first time we see him. Perhaps that's realistic or intentional, but it seems to run roughshod over T'Pol's character. She's been demonstrated time and again as an intelligent, perceptive and strong-willed character. All of a sudden she's acting like a victim, in a way that I simply couldn't believe.

The assault, when it happens, is quite unpleasant to watch. It takes the form of a mind meld, something commonplace among Vulcans in earlier Star Trek series but now set as something forbidden and largely unexperienced by Vulcans. It brings to mind a similarly uncomfortable scene in the film Star Trek VI: The Undiscovered Country, where Spock psychically assaults Lt Valeris in the same fashion. I had a problem with that scene, and I have a bigger problem with this one.

When Toralis is confronted over the assault by Captain Archer, there's a nasty lack of consequences. Toralis is ordered off the Enterprise in disgrace, but does not face criminal charges despite his assault on a member of Archer's crew. The episode ends with T'Pol emotionally damaged and Tolaris sulking away scot-free. I don't like that. It feels tacky and poorly thought out.

There was potential in this episode, but the writers (Phyllis Strong and Mike Sussman) failed to think the concepts through. On reflection, I can't give it my recommendation. That leaves Enterprise with 10 good episodes out of 16, or a score of 63%.
Posted by Grant at 9:29 AM