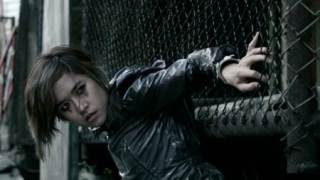 I've noted a few times the similarities between contemporary Thai action films and Hong Kong cinema of the 1980s and 1990s, both the heavy emphasis on action and stuntwork over plot and character and the overwhelming "how the hell did they do that?" bravado of the actors and stunt artists. Raging Phoenix is another addition to Thailand's growing canon of over-the-top martial arts films, although this one adds a lot of Michael Bay-inspired camerawork and a genuinely odd plot that seems to get stranger the longer the film goes on for. Had it continued for another 20 minutes I wouldn't have been surprised to see aliens show up.

Jiji Yanin plays Deu, a young woman whose kidnap is averted by three drunken martial artists. Together they instruct her in their peculiar style of fighting, which seems to comprise one part drunken boxing and one part hip hop dancing. The three men - the brooding Sanim and the eccentric Dog Shit and Pig Shot - have teamed together to defeat a criminal gang that has been kidnapping young women across the city for some years. Deu vows to join them - but there are some game-changing factors of which she is not yet aware.

The set-up of Raging Phoenix seems relatively ordinary, albeit with a ridiculously entertaining new style of martial arts. The hip-hop drunken boxing looks remarkably silly, yet it is so amiably engaging it's hard not to like it. The lead performers are all highly engaging to watch, with Yanin in particular demonstrating herself as a highly charismatic and talented new action star (this is her second film). The storyline gets progressively strange, with its protracted climax moving from a city market to an underground lair to something out of an Indiana Jones film. The villain's scheme is utterly bizarre, and pushes the film dangerously close to fantasy rather than the gritty streetwise action the film's first half suggests. How much you enjoy Raging Phoenix will depend on how willing you are to accept the film on its own merits and simply go with the flow. For my part, I found it wonderfully eccentric and marvellously entertaining.

One other aspect in which the film distinguishes itself is through its look. A combination of wide angle lens, crane and steadicam shots and yellow-toned colour filters have given Raging Phoenix a look and feel not too far from Michael Bay extravaganzas like Bad Boys and Transformers. It gives the film a slick, professional look that Thailand's action movies often lack.

In short: if you're looking for Asian martial arts films, this is "one of the good ones". Beyond that simple recommendation, however, it's refreshing to see a film with such a strong, engaging female lead and with such a visible sense of fun about itself. Jija Yanin definitely looks like an action star to watch.
Posted by Grant at 3:23 PM