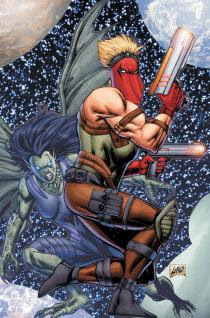 Since DC launched the New 52, cancellations of comic books have received more attention than ever before. It's odd when you think about it: the primary reason for cancellation is that no one is reading the book, so why should we care when the book ceases publication?

So four books have been confirmed to end in January: Blue Beetle, Grifter, Frankenstein: Agent of SHADE and Legion Lost. Two of these are not a surprise: Grifter and Legion Lost simply haven't been very good or popular comics since they debuted, and in the case of Grifter I'm surprised it's taken this long for it to be cut.

Blue Beetle is a bit more surprising: while the comic hasn't been selling very well, DC has shown a very dogged intent to make Jaime Reyes a major character. Certainly he has a lot of potential for use in other media. I can easily imagine a Saturday morning cartoon or a Summer blockbuster based around Blue Beetle. I can imagine DC continuing to try and find ways to make the character work - I don't think the problem this time around was the character or the setting, it was simply that it wasn't a very good book.

Even more surprising is Frankenstein: Agent of SHADE. It's been declining in sales, but issue #0 received a 23% bump and for the next four months it's crossing over with the more successful Animal Man and Swamp Thing. I honestly expected DC to give it a few more months.

Apologies for being late with last week's comics: I was in Hong Kong and only picked up my pull list from the comic shop on Monday.

I think it shows remarkable restraint that, asides from a one-issue cameo in Detective Comics, DC has held off including the Joker in the New 52 for an entire year. As a result his return in "Death of the Family" feels like an honest-to-god event, and something to get genuinely excited about for a change. It's a very dark, uncomfortable issue, with Scott Snyder really pushing the envelope on how frightening the Joker should be. The backup story featuring the Joker's reunion with Harley Quinn pushes the edge even further, with an unpleasant threat of violence against women that I actually thinks slips right off the envelope and into the downright horrible. For the most part, this issue is exceptional. It is a very dark read, however, and certainly not for all readers. Particularly kids. (4/5)

Batman and Robin really isn't getting enough critical attention among the various Bat-titles of the New 52. This issue provides pretty much what the entire series has been providing each month: well observed character moments between Bruce and his son Damian, and off-the-wall kick-ass action. In this case, Damian asks whether Bruce loved Damian's mother, while zombies invade Gotham. It's great stuff, and more people should be noticing it. (4/5)

Thank goodness that Zero Month is over and we can resolve some of DC's numerous cliffhangers. We pick the story up with the gang trapped in hell, having been betrayed by Etrigan. This is a really strong issue, showcasing each of the lead characters in turn and winding up on another great cliffhanger. I am loving the complexity that Cornell is bringing to Etrigan, who has traditionally been a fairly two-dimensional character. This title seemed a little bit shaky a few months ago,  (4/5)

Poor Frank. Here he is, one of the more interesting and entertaining characters of the New 52, and he's just been cancelled by DC. This four-part "Rotworld" tie-in is the last story we're going to get, and that makes me rather sad. I'm particularly sad that, for his last four issues, Frank has to participate in a three-way Animal Man/Swamp Thing crossover rather than get to do his own thing. Nonetheless this first instalment is entertaining stuff, and cleverly makes the tedious #0 last month directly relevant to the story. (3/5)

Amy Reeder is a wonderful comic book artist, with a highly expressive style that really brings the stories she works on to life. I was quite sad when her run on Batwoman failed to eventuate, but she's bounced back with this self-contained one-shot with writer Brandon Montclare. It's a slight story, and more than a little derivative, but Reeder's art really makes it work. I was easily charmed by this book, and would happily see more from Montclare and Reeder in the future. (4/5)

I think this might be the strongest issue of The Massive yet. The continuing dry narration remains, but it accompanies a far more humanised and personal story. It also passes the Bechdel Test, for readers who look for that sort of thing. Two members of the crew, Mary and Ryan, trek across Antarctica to secure fresh water, and find that they're not the first water thieves to arrive. Solid story, nice dialogue, great art. All this series needs now is a tighter direction. (4/5) 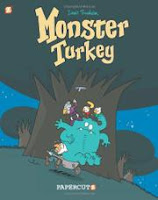 It's the fourth volume of Trondheim's hybrid of a comic book and a children's picture book, and it brings with it a typically delightful blend of everyday life and strange fantasy elements. At this stage of his career, Trondheim's sense of whimsy is so finely tuned I swear he could write and draw these books in his sleep. Anybody with children should be hunting down and buying these books, and Papercutz are packaging them beautifully in French-style hardcover editions at a very reasonable price. (4/5)

Rather than give Red She-Hulk, aka Betty Ross, her own title with a big promotional push and a flashy issue #1, Marvel have elected to simply give her her father's book, Red Hulk, slightly retitled but retaining its original numbering. This irritates me somewhat: superhero comics featuring female protagonists always seem to have a hard time securing an audience, and it's hard not to notice that one of the key reasons is that the publishers themselves aren't supporting their own titles. The comic itself is a mixed bag. It starts off strong (Betty is throwing a tank by page 4) but gets bogged down in a lot of backstory that Marvel is assuming I already know. This is a problem that will affect the next title I review even more. (2/5)

This it it: DC had the New 52, and now in reponse Marvel have launched Marvel Now - a progressive relaunch of its entire superhero line. It kicks off here with Uncanny Avengers, in which Captain America sets up a new Avengers combining superheroes and mutants alongside each other.

If this is supposed to be an entry point for new readers, Marvel has sorely misjudged it. This issue is primarily focused on the fall-out from the recently completed Avengers vs. X-Men maxiseries, which I have not read. The comic plunges the reader into conversations about one character's death, another's incarceration, Phoenix powers, and even a confrontation between two characters over something that happened all the way back in 2005. If you're trying to stimulate interest from new readers in your comic books, relying on plot points from seven years ago is pretty much the worst approach you could make.

The book also features a bizarre inconsistency in tone, veering from (and I'm going to spoil things here, look away) Alex Summers coming to terms with his brother Scott (aka Cyclops) having murdered Charles Xavier to a last page revelation that the Red Skull has stolen Xavier's brain and is going to use it to take over the world. There's definitely scope for Marvel to produce a serious, contemporary Avengers title, and there's also room for them to produce a ridiculous pulp story about renegade Nazi scientists stealing psychic brains. I'm not sure there's scope for Marvel to do both in the same comic.

It's all a shame, because John Cassaday's art is typically wonderful and utterly wasted. There are at least another 20 new titles to come in Marvel Now, so hopefully some gems will emerge, but for now Marvel has managed to trip disastrously over their own feet at the starting line. (1/5)

Winner of the Week: My head tells me it should be Batman #13, but I'm going to follow my guy. I enjoyed Batman and Robin #13 just that little bit more.
Loser of the Week: Uncanny Avengers #1. Simply awful.
Posted by Grant at 10:26 AM