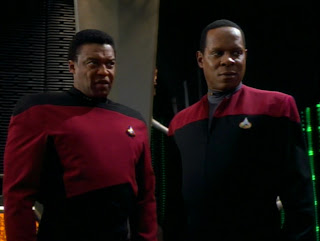 When a Cardassian freighter blows up outside the station, Sisko's investigation leads him to uncover growing unrest among Federation and Cardassian colonies within the demilitarised zone. While the Cardassian central command secretly delivers arms to its own colonies, Federation colonists are taking matters into their own hands.

"The Maquis" is a significant pair of episodes for Deep Space Nine, because in many ways it (and "The Jem'Hadar" in a few weeks' time) establishes the narrative of the series for the remaining five seasons. The series' original set-up was relatively simple: the Cardassians withdrawn from Bajor and the Federation moving in to oversee the recovery. Now we have Federation citizens drawing up militias to fight the Cardassians and Cardassians secretly arming their own civilians to fight back. It's morally ambivalent, unexpectedly messy and typifies the unusual tone and angle that Deep Space Nine holds within the Star Trek universe.


Of course it's also a significant set of episodes for Star Trek: Voyager, in pre-production at the time and set to replace Star Trek: The Next Generation in early 1995. The Maquis form a crucial element of that series' set-up, so it's not a surprise to see Voyager co-creator Jeri Taylor among this episode's writing credits.

This first episode provides a great showcase for Marc Alaimo as Gul Dukat. He's previously been presented as a charming but two-dimensional overlord. Here we see he is a patriot, a father, and a fiercely independent thinker. He gains so much depth here. It's easy to hate most villains. It's difficult to completely hate a villain with a family, and visible emotion, and understandable motives.

Bernie Casey guest stars as Cal Hudson, Starfleet's attache to the Cardassian demilitarised zone and Benjamin Sisko's close friend. Hudson's climactic betrayal, and the revelation that he is leading the Maquis, makes the conflict a very personal one for Benjamin. To be honest I didn't warm to Casey's performance here - he seems a little wooden and flat. Richard Poe is back as Gul Evek - even though it's a small part I really enjoy seeing the continuity that comes from using the same actors in these kinds of roles.

Quark receives a great subplot as he unwittingly negotiates to supply the Maquis with weapons. His romantic overtures to the Maquis representative (a Vulcan, played by Bertila Damas) is both smart and funny, particularly his use of the Ferengi Rules of Acquisition to appeal to the Vulcan sense of logic.

This is a really good episode, with a strong cliffhanger and a provocative shift in how Star Trek generally sees the universe around it. Things aren't so neat and tidy any more. We're up to 14 good episodes out of 20, or exactly 70%.
Posted by Grant at 10:02 AM