Highlander: The Series: "Revenge is Sweet" 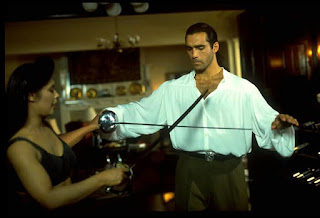 It is 12 December 1992, and time for another episode of Highlander.

In 1988 the immortal Walter Reinhardt (Christoph Ohrt) plunged into the ocean in the middle of a duel with Macleod (Adrian Paul) and has not been seen since. Almost four years later his former lover Rebecca Lord (Vanity) arrives in Seacouver to recover Reinhardt's sword - and to have revenge on Macleod himself.

"Revenge is Sweet" is predictably imperfect - this really is a shaky season of television - but it does have a solid narrative, a back story that actually informs present events and character, and finds something of worth for each of the three series leads to do. It also runs a nice line is rising paranoia: is Rebecca plotting against Macleod? Does she even know that Reinhardt and Macleod are immortals? Is Reinhardt somehow hiding in the background, manipulating events from behind the scenes? As I mentioned, this isn't outstanding television drama. It does show a television series finally beginning to get the hang of itself.

There is a nice overall theme to this episode, about the risks mortal women take in loving immortal men. Its gender politics do feel rather dated in that regard, but it is good to see an episode whose events actually feel underpinned by a larger purpose. It also affords quite a bit more material and agency to Tessa (Alexandra Vandernoot), who continues to be the least utilised character on the series. Here she is well ahead of Macleod in assessing Rebecca's motivations, and even has a fairly tense sense involving a poisoned dress.

Highlander's occasional predilection for pop and rock artists returns, with the singer Vanity (born Denise Matthews) guest starring as Rebecca. She gives a serviceable performance, but it is nothing exceptional. Indeed she vamps it up enough during the episode to come across as vaguely ridiculous.

The episode's sword duels are comparatively strong, although as with previous episodes there is still a visible sense that each routine has been hastily assembled and rushed in execution. (That is almost certainly because it was: the production schedules and budgets on these 1990s syndicated dramas was always fairly punishing.)

With a decent amount of atmosphere thrown in for good measure, "Revenge is Sweet" really does feel like a show that is improving. After 10 episodes, this is the third good one. The quality ratio slides up to 30 per cent.
Posted by Grant at 5:29 PM