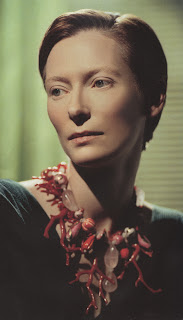 One of my favourite actors in the world is Scottish actor Tilda Swinton. She has carved herself a strong niche playing slightly unusual, somewhat androgynous characters, and her immense talent has been rewarded with acclaim and prizes around the world – including an Academy Award in 2008. These days she balances her time between big Hollywood blockbusters (she’s the White Witch in The Chronicles of Narnia, for example) and small independent features, as well as running a variety of strange and exciting film festivals (my personal favourite is the one held in a hall in the Scottish highlands where everyone watches the films in beanbags while Swinton bakes them cupcakes). Here are five of my favourite Tilda Swinton movies.
Edward II
Swinton played the female lead of Queen Isabella in this transgressive, post-modern and fairly challenging adaptation of the Christopher Marlowe play. The film (released in 1991) was directed by Derek Jarman, who regularly cast Swinton in his projects. It’s very, very much a ‘love it or hate it’ kind of a film – as Jarman’s work always was. I know a lot of people who couldn’t engage with it because it seemed too theatrical and silly. I’ve always found it a somewhat unique, startling movie experience. It’s not something I imagine seeing many times in the future, but I remain very appreciative of it – and Tilda Swinton is great in it. 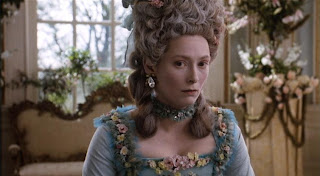 Orlando
By contrast, this 1992 fantasy film is something I don’t expect I shall ever tire of rewatching. Swinton plays the title character in Sally Potter’s adaptation of the Virginia Woolf novel. The film’s story follows the lovestruck young gentleman Orlando as he ceases to age, spontaneously changes gender and then lives through 400 years of history from the court of Elizabeth I (played marvellously by Quentin Crisp) to the 20th century. This is honestly one of my all-time favourite films and I never tire of it. No other film has taken such advantage of Tilda Swinton’s androgynous looks and intense screen presence.
The War Zone
Swinton plays the mother of a shockingly broken family in this 1999 drama directed by Tim Roth. It’s a very different kind of film to Edward II and Orlando: gritty, realistic, emotionally raw and quite difficult to sit through. The film also boasts a potentially career-best performance by Ray Winstone. Given the sheer quality of this film it’s a pity Roth doesn’t direct more often.
Constantine
Francis Lawrence’s 2005 comic book adaptation Constantine has a lot of faults, but ultimately I enjoy it a lot. One of the film’s best assets is its range of talented supporting actors including Djimon Hounsou as Papa Midnite, Peter Stormare as the Devil and Tilda Swinton as the Archangel Gabriel. Swinton is very stylish here, revisiting the androgynous look that dominated so many of her earlier roles: here it’s put to use to give Gabriel a wonderfully creepy, unearthly persona.
Michael Clayton
Swinton plays corporate executive Karen Crowder in this 2007 drama from writer/director Tony Gilroy. It’s the role that won her an Academy Award, and it’s a performance that sits within an exceptionally well-written, characterised and performed film. This is one of those rare pitch-perfect motion pictures. I love the dark, unsettled tone of the film. I love Tony Gilroy’s sense of pace, which becomes quite slow and menacing. It has its eye tightly on its characters, who are three-dimensional, fallible and ambiguous. It has a great musical score by James Newton Howard. It even opens with one of the best movie monologues of the last decade.
Posted by Grant at 9:30 AM